10 people died in severe storms and rain in Bihar Patna: The sudden change of weather in Bihar has brought relief to people from the scorching heat on the one hand, while on the other hand, 10 people have lost their lives. According to information from several parts of the state, about 10 people have died due to the severe thunderstorm. The weather has wreaked havoc in Bihar's Bakan district. Due to the strong thunderstorm near the PACS godown on Panjwara Dhoraiya State Highway 84 here, the board installed there fell on the road. Due to which there was a jam on the main road.

Three people have been reported dead in Muzaffarpur, while one person has been reported in Lakhisarai due to falling of trees and one person has been reported due to wall collapse in Munger. Two children have lost their lives in Bhagalpur after being buried in a tree that fell in the storm. It is being told that at around 3.30 pm, the weather suddenly changed completely in Patna. On the one hand, the faces of the Patnaites lit up as soon as it rained. On the other hand, people who came out of the market and houses were trapped amidst a strong dust storm on the way.

It is being told that the wind speed was more than 60 kilometres per hour. Due to which many areas were dark. A tree from Patna Museum fell on the road in the strong wind. Apart from this, a woman was hit by a palm tree on Deshna Road under the Asthawan police station area due to strong winds. The woman lost her life in this incident. 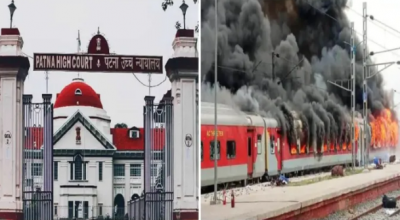