New Delhi: The Government of India'Omicron s Health Ministry quoted the World Health Organization (WHO) as saying that the omicron variant is 5 times more deadly than the delta variant of corona and is feared to spread rapidly. It has spread to 29 countries. WHO has placed it in the category of Variant of Concern (VOS).

Joint Secretary of the Ministry Luv Agarwal informed that corona cases have been declining in the country for over a month. Now there are more than 10,000 active cases in two states, Maharashtra and Kerala, which are 55 per cent of the country's. This reduction has been observed in cases of infection after 49 percent of the population contracted both doses of corona vaccine.

On the other hand, Health Minister Mansukh Mandaviya tweeted about vaccination and wrote, "Sabka Saath, Sabka Prayas. Another proud moment for every Indian, because the country has crossed the 125 crore vaccination mark. As India intensifies HarGharDastak campaign, the country is moving ahead with a new vigour and new energy in its fight against corona. 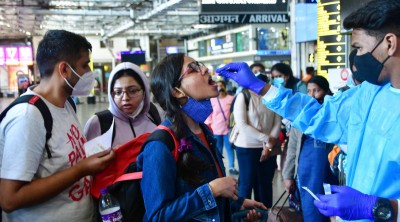