Although Kangana Ranaut is keeping mum on the dreadful spat with Hrithik Roshan, her sister Rangoli Chandel has been hurling salvos in defense of her sister on Twitter.

After Farhan Akhtar, Yami Gautam among others have openly extended their support to the 'Kaabil'  fame star Hrithik, Rangoli took to the micro-blogging site Twitter to criticize those who are supporting him by saying Kangana has always fought her battles alone.

In a series of tweets, Rangoli told, "These small minded people should know Kangana is not here to fight them, she has a higher purpose and bigger cause, when they laugh at her, gang up on her and humiliate her joke is on them." 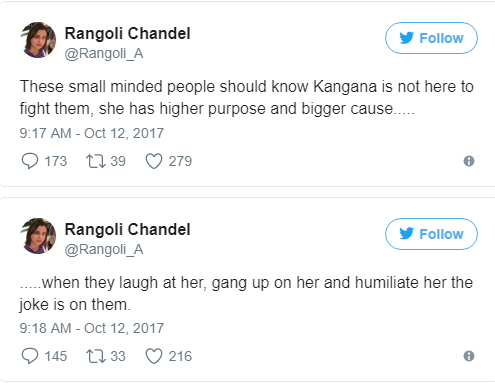 She did not end here and nonstop doing writing, "When she fought for pay disparity, many women from the industry attacked her by saying that women can't solicit for equal pay."

When she fought for pay inequality, many women from the industry attacked her by saying that women can't ask for equal pay.

A few days back also Rangoli took to social media to address the stars who lent their support to Hrithik.

In a series of tweets, she called out Farhan Akhtar, Sonam Kapoor and Karan Johar and slammed them for supporting Hrithik.

She wrote, "Dear @FarOutAkhtar your views could've been appreciated if you and your father were not so biased to Roshans."