In a GQ magazine cover page Two big titans of Hindi cinema are placed and we have to say that they are looking super striking and dapper in their official looks. Es we are talking about  two Thugs of Hindostan    Aamir Khan  and  Big B.

The magazine took to their official social media handle and shared the pic of the cover. They tweeted : #GQNovember: It took 30 years for @aamir_khan and @SrBachchan to finally make a movie together. So we put them on a cover together too. Presenting our November 2018 issue, in which these two superstars look their best. On stands soon! #: Tarun Vishwa.

As we all knoe that the fans have already gone ga ga since the trailor of TOH has relesed.

Aamir Khan was seen donning a royal blue-hued suit while Big B was seen sporting a dark-hued grey suit. Both are featuring together for the first time in the movie Thugs of Hindostan. The movie is directed by Vijay Krishna Acharya  who earlier has  created Dhoom 3 and Tashan. The movie is set in the 1700s. It tells a story of Thug and their gang fights with British East India company for the independence of the nation. 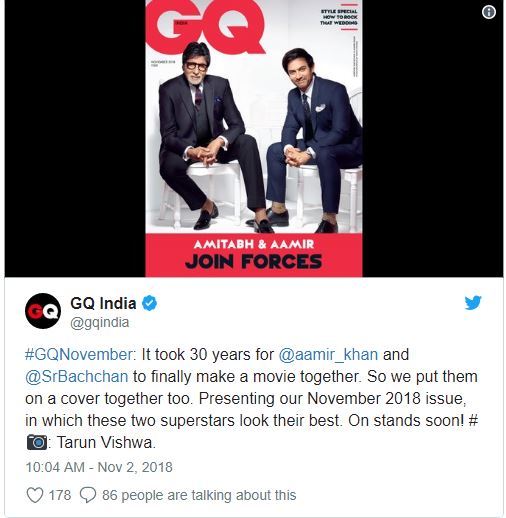