Aamir divorces Kiran after falling in love with Barkha Dutt! Know the truth Mumbai: A shocking claim is being made on social media after Bollywood actor Aamir Khan's divorce. According to the claim, the reason behind Aamir and Kiran's divorce is journalist Barkha Dutt. A video with the viral message is also going viral stating that the friendship between the two started developing from the Kargil trip itself. The viral message says, "Jinx Barkha Dutt is the reason for Aamir Khan's divorce. It's not a joke. Watch this video Aamir and Barkha have been meeting each other secretly for a few years and now the news has come about Aamir and Kiran Rao's divorce. The only thing to think about is why Aamir gets only Hindu women to pretend to love. Now don't say where Barkha Dutt is a Hindu.'' 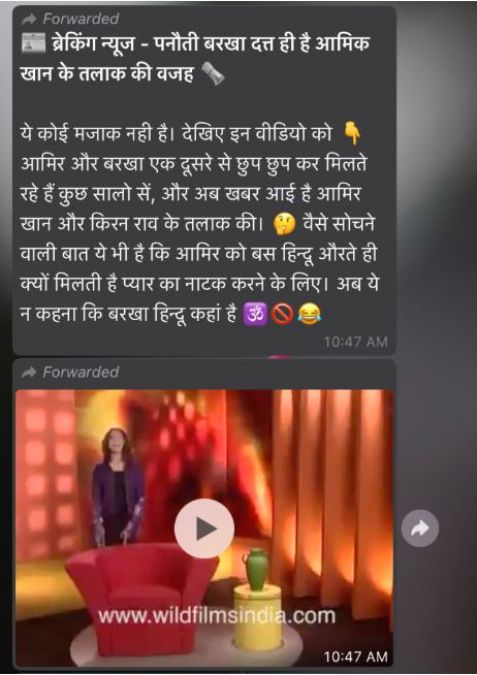 In the video shared with the message, the host reveals that Aamir Khan was in the news for his relationship with a journalist named Jessica Hines and is now in the news for his close association with Barkha Dutt, a (former) journalist from NDTV. The host says the love story of the two started on their way to shoot on Kargil. The host also said in the video that Aamir has to go to Barkha Dutt's city Delhi because of his work where the two were often spotted at a lot of parties. The host says the love story of the two cannot remain hidden for long as Barkha Dutt is a journalist. When the claim went viral on social media, it was found that Barkha Dutt and Aamir Khan had gone to Kargil together for the Jai Jawan episode of news channel NDTV. After which there were discussions that a journalist often visited Lagaan on the sets to meet him during the shooting.

Some sites claimed at the time that these close ones led to divorce from his first wife Reena Dutta. So, it is clear that Barkha Dutt is not the reason behind Aamir's divorce from Kiran Rao. Old claims are going viral on social media. According to a 2004 report, when a media person questioned Barkha Dutt about her alleged relationship with Aamir Khan, she was angry and asked the media person who you were.

Aamir Khan has been in a lot of controversy over his relationship. His film Lagaan was released in the year 2001. This was followed by the announcement of her divorce from Reena Dutta in December 2002. He then met Kiran Rao on the sets of a film and in 2004, a journalist named Jessica claimed that his son Jan is Aamir's son, who was born on September 13, 2004. However, Aamir Khan had denied Jessica's claims. Aamir married Kiran Rao in 2005 and now after 15 years, he has divorced her as well. However, it is now rumored that he is having an affair with Dangal co-star Fatima Sana Shaikh.