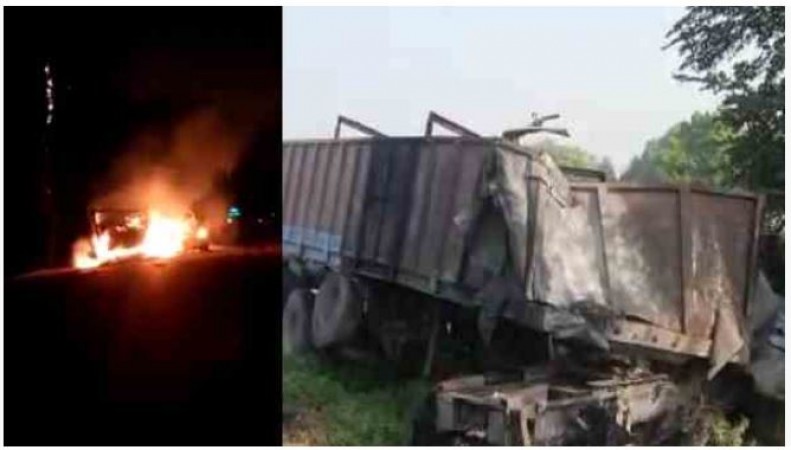 Kanpur: The news of the tragic accident that takes place day by day surprises everyone. Now, the news has come from the Kanpur district of Uttar Pradesh. In fact, on the morning of October 10, a trailer and a truck collided head-on on the Kanpur-Hamirpur highway here. The collision was reportedly so severe that both the vehicles caught fire. According to the information received, two drivers and an operator were burnt alive in the fire in the vehicles. The accident led to a 15 km long jam on the highway.

As soon as the incident was reported to the police, they reached and sealed the three remains and sent them for postmortem. At the same time, the police removed the crashed vehicles from the road and started traffic. The highway was reportedly jammed for nearly five hours. According to the information received, the accident took place near Amoli village of Sajeti police station on Kanpur-Hamirpur highway in Kanpur district. According to police, they say that 40-year-old driver Karnchhedi and cleaner Arvind, 19, were on their way to Kanpur in Bijor, Chhatarpur with a barley laden truck. Meanwhile, they collided with the trailer coming from the front and caught fire.

As soon as the fire broke out, Arvind jumped and saved his life but the injured driver and operator trapped in the trailer and the driver trapped in the truck, Karnchhedi, were burnt alive. In the entire case, the truck's operator Arvind told the police, "He somehow jumped out of the truck due to an accident at night, after which the flames intensified. He noticed the accident on the highway and informed the police from the mobile of the driver of a truck who stopped after seeing the incident.''

Weather: Heavy rain alert in these states till Oct 14

LAC: 13th round of Commander Level Meeting between India and China underway