TV's famous host and singer Aditya Narayan has not earned a big name in the world of singing like his father, but he is dominated in the world of hosting. They get engrossed in the show they are associated with. Aditya has delighted the audience with his good looking personality and charm. Apart from hosting, he also keeps trying his hand in singing and acting. Recently, a fan asked him a question about Tejasswi Prakash during the Ask Me Anything session. When Aditya gave a funny answer to the question, Tejasswi's reaction also came.

Actually, Aditya was asked by a fan - Tejasswi Prakash and you are such a good friend. If you make a music video with her, it will be awesome. What is your idea about this? Giving a funny answer to this, Aditya said that - yes, but after winning Big Boss, I can no longer afford my beloved Tejasswi Prakash. But if it happens, I will be very happy. 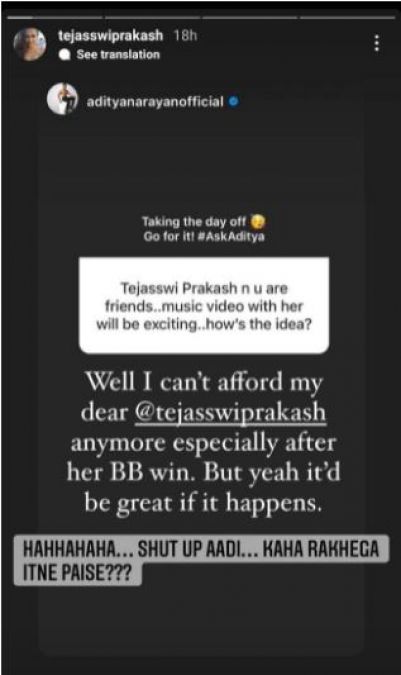 Now you must have seen the presence of Tejasswi Prakash in Bigg Boss 15. Here too, with her best humour, Tejasswi stopped Aditya's speech. She said- 'Hahahahahaha, shut up Aadi, where will you keep so much money?' Aditya Narayan recently said goodbye to the popular singing reality show Sa Re Ga Ma Pa. He had been associated with the show for the past several years. Many stars and fans appeared disappointed by this decision. Aditya also appears in the role of a host in Indian Idol.

This famous couple of Bigg Boss has stopped the secret ceremony! The video went viral