Actress Urfi Javed has always been in the news for some reason or the other. She is the most active actress on social media and gains attention from her quirky outfits. Urfi is also trolled a lot because of her outfits but often never shies away from defending herself. Urfi loves interacting with fans. Recently the actress was shared a funny picture by a fan who also liked Urfi and shared it with fans on social media.

Funny photo of Urfi Javed: According to media reports, Urfi Javed shared a picture on Instagram Story where UP CM Yogi Adityanath is seen attending a meeting. The TV is running in front of them in the middle of the meeting. Interestingly, Urfi Javed is visible on the TV screen. The picture was shared by Urfi on her Instagram story in which Yogiji is seen sitting with other members and having a conversation.

Sharing the picture, Urfi captioned it as 'It was amazing to attend this meeting with Yogiji. Someone sent me this and I laughed a lot.' It can be seen on TV that Urfi Javed is seen in a navy blue saree. Well, it's a coincidence that Urfi Javed was seen on the screen when these photos were clicked. But Urfi made it extremely funny. 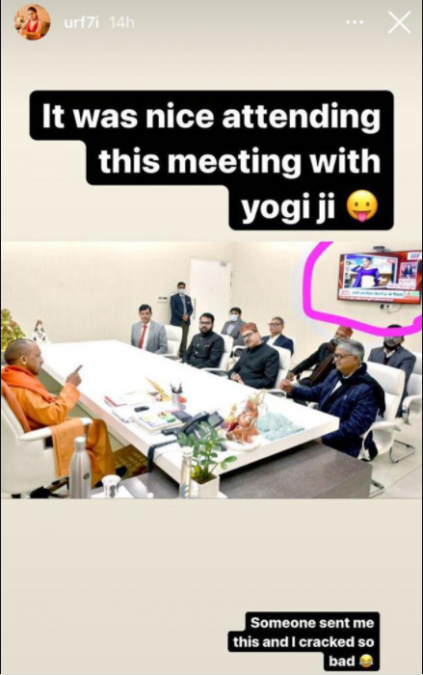