Bollywood's gorgeous diva Alia Bhatt is currently engaged in enjoying her pregnancy phase. Even during pregnancy, Alia is super active and is seen promoting her upcoming movie 'Brahmastra'. Alia's stunning looks during pregnancy are also winning the hearts of fans. Recently, once again she was seen in such a way that seeing her, Malaika Arora could not stop herself from speaking her mind by looking at her.

In fact, before the launch of the song Deva Deva from the movie 'Brahmastra', Ranbir Kapoor and Alia Bhatt were recently caught on camera together for the first time after their marriage. Meanwhile, while Ranbir is seen wearing black jeans with a black shirt, Alia is wearing a brown colour one-piece, after which Alia also shared her single picture flaunting the baby bump. On social media, Alia's baby bump photos are making a lot of headlines. Alia's pregnancy glow is also clearly visible in the pictures. As soon as Alia's photos surfaced on social media, Malaika couldn't stop herself from commenting. Malaika commented on these photos and wrote- "Baby bump is suiting you.'' Along with this, in the second comment, she also made heart emoji. 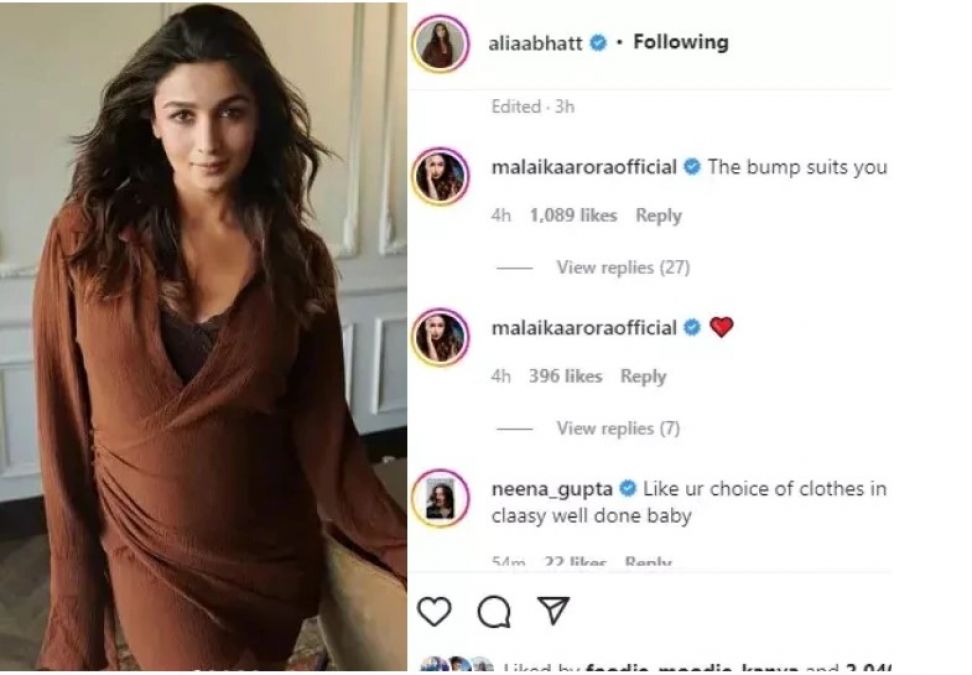 Along with Malaika, many more stars also commented about Alia's dressing sense and her baby bump. Neena Gupta wrote- "The choice of your clothes in pregnancy is very different.'' Earlier, during the promotion of the film Darlings, Arjun Kapoor had also praised Alia's dressing sense. Arjun Kapoor praised Alia's pictures and commented on her - 'Such a jawline in pregnancy... It's amazing Alia Bhatt, too good." Esha Gupta also gave a lot of love to Alia's photos.