LAHORE: Babar Azam's Pakistan defended their lowest score in Pakistan (145) in another thriller to go 3-2 up against England following a six-run victory in the seven-match T20I series at the Gaddafi Stadium here late on Wednesday.
Managing just 145 runs in 19 overs, thanks to superb bowling effort from England pace bowler Mark Wood (3/20) and Sam Curran (2/23), the host were counting on luck to win the game, but all six Pakistan bowlers bowled exceptionally well to restrict the visitors to 139/7 to help the hosts take a 3-2 lead in the series.

After edging England out by three runs in the fourth game at Karachi on Sunday, Mohammad Nawaz was phenomenal with the new ball and derailed England's run chase from its onset with the wicket of Alex Hales, who trying to swat the left-arm orthodox down the ground edged the ball into the hands of short third-man.

Phil Salt picked up the only fielder guarding the leg-side boundary on the first ball of the fourth over when he flicked Haris Rauf to leave England at 19 for two, according to PCB.

Mohammad Wasim Jr bowled a brilliant fifth over, beating Dawid Malan four times by hitting the corridor of uncertainty and when Malan finally got off the strike with a thick edge on the fifth ball, Ben Duckett's attempted cut ended into third-man's hands.

The introduction of spin further compounded the problems for England. The pair of Shadab Khan and Iftikhar Ahmed bowled eight overs in tandem that allowed only 41 runs, but more importantly accounted for in-form Harry Brook and Malan. The overs 7 till 10 allowed England only one boundary and Shadab, making his comeback into the side, got Brook LBW -- when the on-field umpire's decision was overturned through DRS.

Iftikhar, after drinks, sent Malan back to the pavilion in a similar fashion. Shadab's four overs allowed 25 runs, while Iftikhar gave away only 16 runs.

That the match went till the final ball was because of Moeen Ali's fighting knock. The England captain scored 51 not out off 37 and took the game deep in the hope that he may target any weak link in the Pakistan bowling line-up.

Debutant Aamir Jamal, who replaced Mohammad Hasnain, was given the task of defending 15 off six balls. The right-arm fast bowler was exceptional with his yorkers, sending down dots on his first two balls, and despite being dispatched for a six on the third legal delivery (the previous one being a wide outside off-stump), he made a fine comeback to allow only a single - that off a penultimate ball. 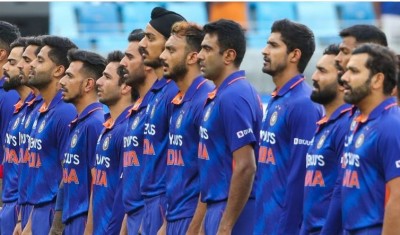