'Come and show by contesting from Hyderabad..', will Rahul Gandhi accept Owaisi's challenge? Hyderabad: Former Congress national president Rahul Gandhi is on a visit to Telangana these days. Earlier in the day, Rahul Gandhi had said in Warangal that the contest in Telangana was only between the Congress and the Telangana Rashtriya Samiti (TRS). Without naming anyone, Rahul Gandhi rejected both Asaduddin Owaisi's party AIMIM and the Bharatiya Janata Party (BJP).

Now, All India Majlis-e-Ittehad-ul Muslimeen (AIMIM) chief and Mp from Hyderabad Asaduddin Owaisi has challenged Rahul. Owaisi has said that now you will lose from Wayanad also, let's try your luck in Hyderabad. Hyderabad MP Asaduddin Owaisi has also attacked Rahul Gandhi's visit to Telangana. In a challenge to Rahul Gandhi, the Lok Sabha MP from Kerala's Wayanad seat, Owaisi said, "I am saying that now you will lose from Wayanad also. Come, contest from Hyderabad. Try your luck. You can also contest from Medak.''

In fact, earlier in the day, Congress leader Rahul Gandhi, while addressing a programme from Warangal in Telangana, had said that the contest in Telangana is only between the TRS and the Congress. Rahul had given him a direct challenge by not naming Owaisi's AIMIM and the BJP in gestures. To which Owaisi has now responded.

Digvijay became 'Ram' and Scindia was seen stabbing Kamal Nath in the back, Congress put up a controversial poster in Gwalior"

Thank you that 'Kejriwal' does not have the Delhi Police in his hands, otherwise he would have imprisoned the Prime Minister... 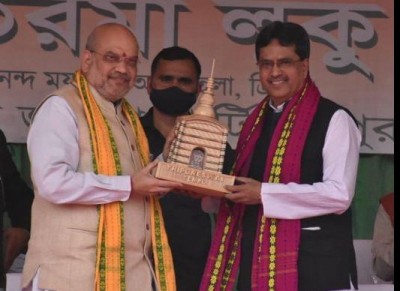