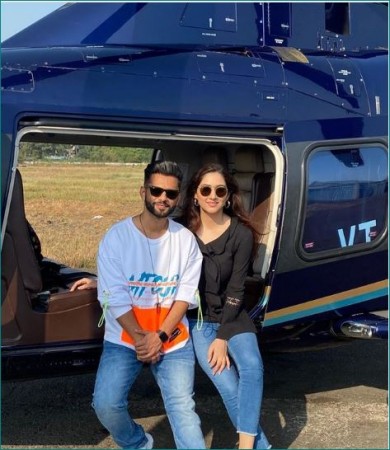 The finale of Superstar Salman Khan's show Bigg Boss 14 to be aired on Colors TV. Talking about the winner of the show, she has been Rubina Dilaik. Actor Rubina Dilaik, who once appeared in the TV serial Shakti, has now become the winner of Bigg Boss 14. At the same time, talking about the first runner up was Rahul Vaidya. If you remember, the friendship between Rahul Vaidya and Aly Goni was the most talked about in Bigg Boss 14. We can say that these two turned out to be Jai-Veeru of Bigg Boss house this year.

Recently, on the day of Aly Goni's birthday, when Rahul Vaidya did not congratulate the actor on social media till late in the evening, questions started to arise in the minds of people that the friendship of the two was broken. Now according to the recent news between all of them, Rahul Vaidya greeted Aly birthday on a live chat and during this, both of them had a long conversation. By the way, after seeing the conversation between Rahul Vaidya and Aly Goni, it is coming to know that both are still strong friends. During this conversation, Aly Goni made such a demand from his friend Rahul Vaidya that Rahul Vaidya started blushing.

Teasing Rahul Aly demands to be chachu soon so he can have bachha company in Mumbai too. Commenting back to Alt's statement Rahul said that he can very well make him a chachu soon but Disha would not let him. In fact, in this video, Aly Goni, introducing his sister's children to Rahul Vaidya, says that 'he loves playing with children.' Rahul also says to Aly, 'I will make you Chachu but Disha will not allow me to make you Chachu nor make me Papa so soon.' In the end, Rahul Vaidya and Aly Goni laugh a lot.