After killing the Bollywood industry, Madhuri Dixit is now all set to make her debut in the Marathi film industry. The actor is set to hit the big screen with the Marathi film 'Bucket List'. The teaser of the movie was released last month.
Recently, a new poster for the film has been released. In which, the 50-year-old looked stunning in a green with pink saree. The whole attire is giving her a Marathi Mulgi avatar. You can see her in a whistling pose on the poster and has a cute expression on her face. Her Nath (nose pin) is adding more beauty to her look.
Madhuri Dixit has also shared a teaser poster on her Twitter handler.

Check the poster out: 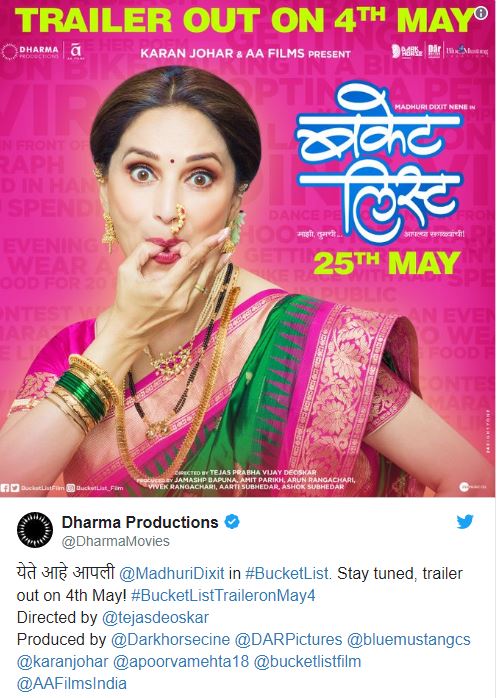 According to the reports, the official trailer for Bucket List will be out on May 4, 2018. When asked about the film earlier Madhuri Dixit said that it is a story of every household yet it has a silver lining. It not only gives you hope and inspiration but also prompts you to live life in the actual sense. She further added that the fascinating factor for me to choose it is that it is going to carve a niche in everyone’s heart.

The film, Bucket List has been produced by DAR Motion Pictures, Dark Horse Cinemas and Blue Mustang Creations. The film is presented by Karan Johar's Dharma Productions. The film is slated to release on May 25, 2018.