The relationship between Sushmita Sen's brother Rajiv Sen and sister-in-law Charu Asopa has reached a divorce. The two are constantly blaming each other. Things have become so much worse that the two have even resorted to the legal process for divorce. Meanwhile, Charu Asopa has got such a piece of good news after which the actress is very happy. What's special is that Charu has shared this joy with her fans as well. This post of the actress is fast going viral.

For the last few days, Charu Asopa has been going through a difficult phase in her continuous personal life. But Charu is still somehow managing things by managing herself. At the same time, Now Charu has got such a piece of good news that she is not able to hide her happiness from anyone. The proof of which is Charu's Insta story. 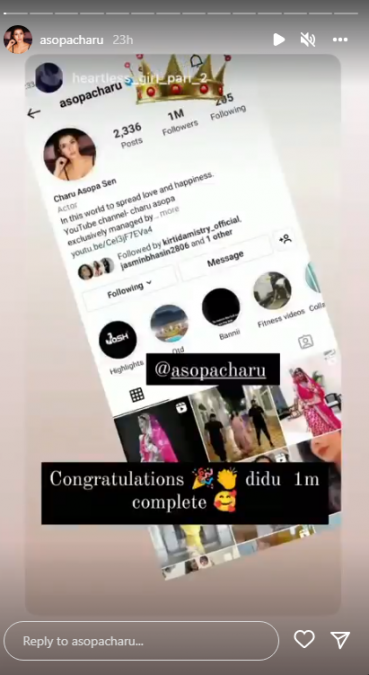 Charu Asopa has shared a screenshot on Insta Story. This screenshot is from Charu's Insta page whose followers have now become 1 million. The same screenshot of the page has been shared by Charu Asopa on Insta Story. To which someone wrote in the caption- "Congratulations to you Charu ma'am... 1 million... Make great progress and shine.'' Charu Asopa continues to be in the news amid reports of divorce. The actress recently went to a fashion show where she walked the ramp in bridal attire. The actress has also shared the look of the bridal attire on social media. In which she looks beautiful. Her video also went viral on social media.

These 17 famous stars will be seen in Bigg Boss! See full list here