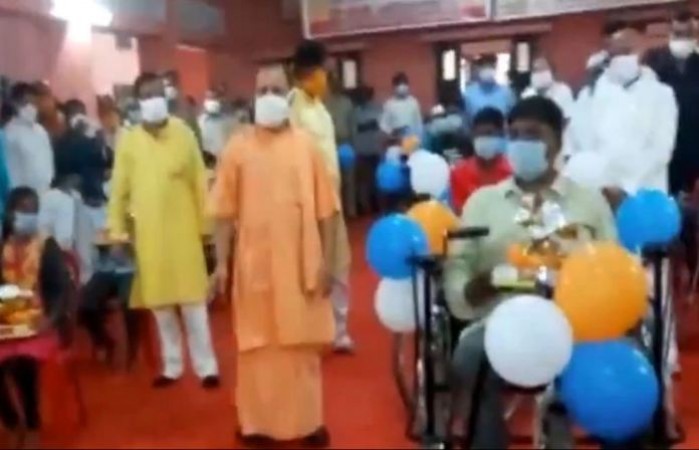 Gorakhpur: Uttar Pradesh CM Yogi Adityanath distributed tricycles, wheelchairs and other devices along with smartphones to handicapped people in Gorakhpur on Thursday to mark PM Narendra Modi's 70th birthday. Speaking on the occasion, CM Yogi said that the atmosphere was very bad when Narendra Modi took over the PM's chair six years ago in the country.

He said that at that moment there was an atmosphere of anarchy, chaos, mistrust and insecurity in the country. PM Modi, with his highly efficient performance, put the country back on track with development. Now the people of the country feel proud and secure. He has given a very strong system to the country. CM Yogi said that the country has undergone a major change in six years on the strength of PM Modi's efficient and far-reaching leadership.

CM Yogi said that the change is seen all over the country. All developed countries have also been convinced of PM Modi's working style. Even during the corona pandemic, PM Modi tried to help every faction of the country, declaring a big package of financial assistance for the poor and looking for new opportunities for those who lost their jobs. In times of crisis, everyone has access to medicine and treatment. On behalf of the citizens of Uttar Pradesh, I wish PM Modi. May God bless him and he grows even further in the world in a similar way.

North Korea to test missiles into the Sea