New Delhi: The police have taken action after several people who were justifying the brutal murder of tailor Kanhaiyalal by fanatics in Udaipur on June 28, 2022, came to notice. In fact, these people were encouraging this deafness, while some even celebrated Kanhaiyalal's murder by bursting fireworks. So far, in many such cases, the police have acted on the complaints of the people.

In Uttar Pradesh, police have been arrested from Bareilly on charges of justifying the brutal murder of Kanhaiyalal. The name of the accused is Mohsin Qureshi. Mohsin had not only justified Kanhaiyalal's murder on his Facebook but also advocated for more such killings. According to the Bareilly police, Mohammad Taj, who wrote inflammatory posts on social media, has also been arrested. In another incident in Bareilly, the police registered an FIR against a man named Nazim Alvi at Police Station Baradari. Bareilly police informed this on Twitter on June 30, 2022. According to the FIR, Nazim has threatened to behead a man Aman Rathore, who supported Nupur Sharma, before Eid. Hindu organisations have also submitted a memorandum to SSP Bareilly to protest against the threat.

At the same time, in Saharanpur in UP, 2 different people have been threatened to do the same as Kanhaiyalal of Udaipur. This threat was made to them through a letter. One of them is Bajrang Dal activist Rajat Sharma. Saharanpur SSP Akash Tomar took cognizance of the threat and provided gunners on behalf of the police to the threatened people. With this, a case has been registered in this case and a search has been launched for the threat. 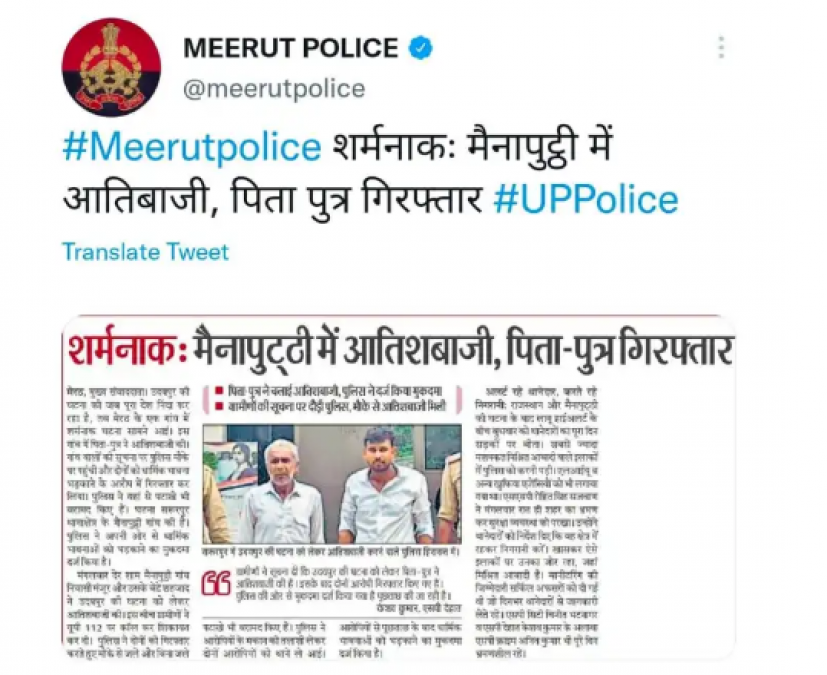 Meerut police have arrested father-son Manzoor and Shahzad for their alleged involvement in the murder of Kanhaiyalal. Fireworks were done on the same day Kanhaiya was killed in Udaipur. The case pertains to village Mainaputhi in Meerut. However, on the complaint of the villagers, the police arrested both of them and sent them to jail. At the same time, Bulandshahar police arrested a Wali who had put Rajput in his name on the charge of putting the status of 'head detached from the body' on WhatsApp.

In this case, the police themselves have lodged a complaint. According to the complaint, Wali Rajput, son of Mohammad Umar, wrote on his WhatsApp status that "The same punishment of Gustakh-e-Nabi, the head will be separated from the body, be angry in your glory, separate his head. This had sparked outrage in the Muslim community.'' In this case, the police arrested Wali and seized his mobile phone.