J&K: 1 Jawan and 2 police personnel injured in encounter with terrorists 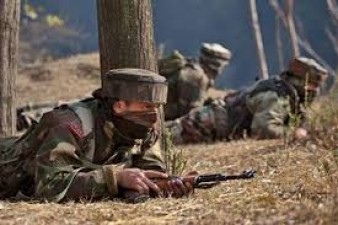 Srinagar: Pakistani terrorist Zia Mustafa has been brought to Bhata Dhurian in Poonch district by security forces in Jammu and Kashmir to ascertain the terror hideout. Meanwhile, heavy firing by terrorists is said to have taken place in which one jawan and two police personnel were injured. Let me tell you that terrorist Zia Mustafa has suffered injuries. On the other hand, police said, Mustafa could not be evacuated from Bhata Dhurian due to heavy firing.

In fact, the Jammu and Kashmir Police says that the encounter started during the retaliation by the security forces. Further, police said that when the team approached the hideout at Bhata Dhurian during the search, the militants suddenly fired again at a joint team of police and army personnel. In Jammu and Kashmir, the anti-terror operation continues for the 14th day in Poonch and Rajouri districts. In fact, last week, nine army personnel were killed in two separate attacks by terrorists hiding in these forests. Let me also tell all of you that the Indian Army operation against terrorists is going on in Jammu and Kashmir.