New Delhi: A picture is fast going viral on social media platforms. In this picture, it is being claimed that during 1971-72, Rs 9.33 lakh tax had to be paid on the earnings of Rs 10 lakh. Is it true? Or is it just a rumour? 1971-72 means when Indira Gandhi was the PM of the country and was the Congress government. If someone earn Rs 10 lakh at that time, then he would have paid more than Rs 9.33 lakh as tax?  In fact, Congress MP Shashi Tharoor had tweeted the 1945 income tax rates, taking a jibe at Union Finance Minister Nirmala Sitharaman. After this, the tax slab of 1971-72 started going viral on social media. 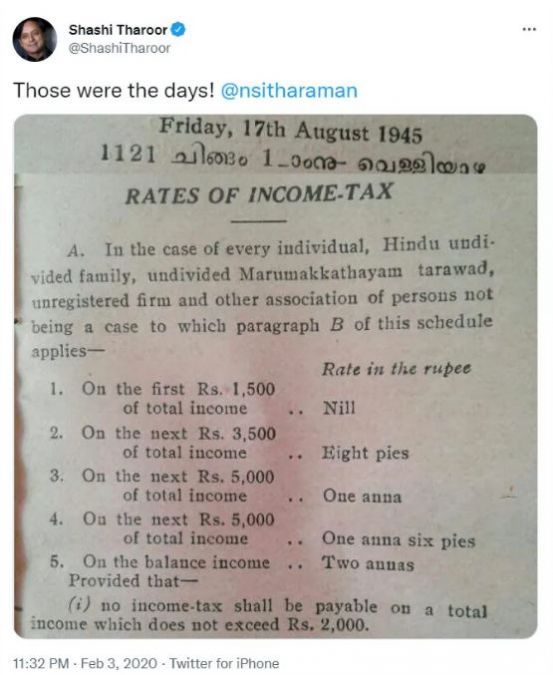 In response to Shashi Tharoor's tweet, Twitter user Ankur Singh shared a picture of the 1971-72 tax slab, which is still viral on social media platforms. If his post is to be believed, during that period, anyone with an income of more than one million would have to pay 85 per cent tax and 10 per cent subcharge. That is, in total, they had to pay 95 per cent of their earnings. Fact Hunt had carried out a detailed analysis of the above tax slab of 1971-72 in the year 2020. During this time, he had found that this picture of the tax slab of 1971-72 is correct. The then, PM Indira Gandhi announced the individual income tax slab rates during her Union Budget speech on February 28, 1970. Let me tell you that during that time Indira Gandhi also had the Finance Ministry. 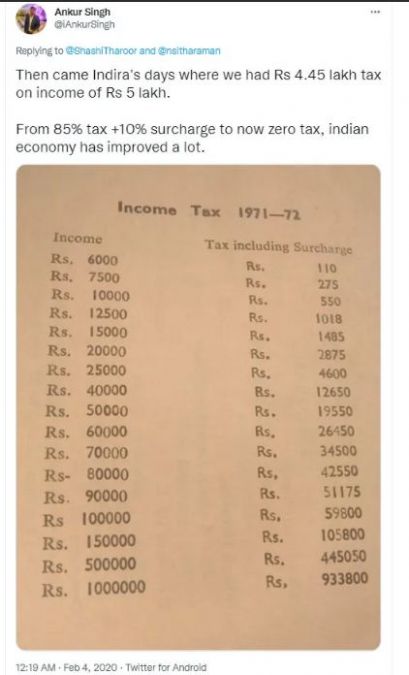 As per the personal income tax slab rates for the financial year 1970-71, the rate of income tax for anyone with income between 5000 and 10,000 was 10 per cent. The income tax rate increased at an interval of an additional Rs 5000 and those who were earning between Rs 30,001 and Rs 40,000 were paying 50 per cent of their hard-earned money as tax. In the assessment year 1971-72, as the income slab became higher, the tax rate for those with an income of Rs 2 lakh or more became 85 per cent of the total income. The point to note here was that at that time, the government had also imposed a 10 per cent sub-charge on the income if the total income was more than Rs 5,000.