Recently, popular comedian Bharti Singh shared a boomerang video of her husband Harsh Limbachia sleeping on his side on a flight. Bharti captioned her Insta story as 'Wake Up'. Let me tell you that till recently fans thought that Bharti and Harsh were going to attend Vicky Kaushal and Katrina Kaif's wedding in Rajasthan.

However, Bharti put a complete stop to the rumours with another boomerang video. He wrote along with the video 'Friends, we are going home from Dubai, not vicky-katrina wedding'. According to media reports, actors Vicky Kaushal and Katrina Kaif are all set to tie the knot in Jaipur on December 9. Many Bollywood stars have been seen leaving Mumbai for Jaipur. Neha Dhupia and her husband Angad Bedi were seen arriving in Jaipur. Singer Gurdas Mann, Wife Manjit Mann were also spotted at mumbai airport. 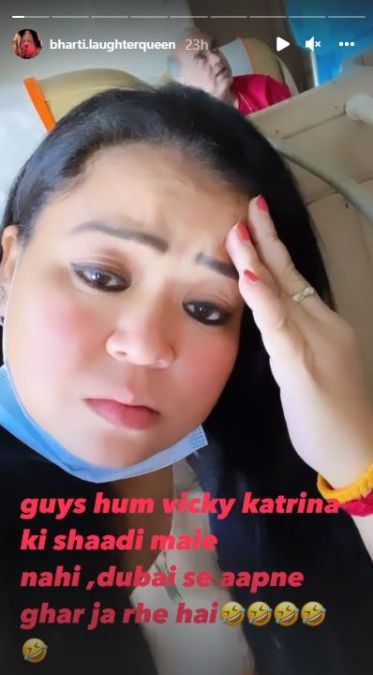 According to media reports, Vicky and Katrina are scheduled to take seven rounds at Six Sense Fort Barwara in Rajasthan this week. The pre-wedding celebrations will begin on Tuesday and Wednesday. The wedding will also take place on Thursday. Apart from this, many Bollywood stars including Kabir Khan-Mini Mathur, Angad Bedi-Neha Dhupia and Sharwari Wagh are on vicky and katrina's wedding guest list. According to media reports, guests have been given code names to keep the wedding secret.