PARIS: The thrilling match between Germany and England ended in a 3-3 tie on Monday despite England's three-goal comeback after falling behind by two goals. Kai Havertz's late goal was also his second of the game.

Italy, the defending European champions who did not make it to the 2022 World Cup, regained some prestige by defeating Hungary 2-0 in the match for first place in Budapest, advancing to the tournament's semifinals, according to Xinhua. For the Azzurri, goals were scored by Giacomo Raspadori and Federico Dimarco.

Unlike Italy, England and Germany will both be competing in the World Cup in less than two months, but neither team has yet to reach its peak performance.

Germany only managed one win from the six group games, a 5-2 success over Italy in June, and their dreams of moving on were dashed by Hungary's victory at home on Friday.

At Wembley Stadium, the four-time World Cup champions appeared to be heading for victory as Ilkay Gundogan and Havertz scored goals to put them 2-0 up after 67 minutes.

Harry Maguire, a defender for Manchester United who has received criticism for his recent club performances, has received the complete confidence of head coach Gareth Southgate and has started once more for the Three Lions, but his most recent error may threaten that support.

The 29-year-old centre back sent the ball to Jamal Musiala, who lost possession of it, and then tripped the teenager in the penalty area to give the opposition a penalty that Gundogan converted.

15 minutes later, Maguire shifted positions in midfield, allowing Chelsea attacker Havertz to curl in an incredible effort from the edge of the area.

With a potential third straight loss on the line, England displayed outstanding resiliency by scoring three goals in only 12 minutes to turn the game around.

In the 71st minute, Luke Shaw scored a consolation goal, and five minutes later, substitute Mason Mount equalised. The amazing comeback was completed in the 83rd minute when Harry Kane successfully converted a penalty given by VAR.

However, that was not the end since Havertz equalised in the 87th minute by capitalising on a mistake by England goalkeeper Nick Pope. Bukayo Saka's close-range shot was blocked by Germany goalkeeper Marc-Andre ter Stegen in stoppage time, which may have ended the game.

Southgate claimed that "a few mistakes have cost us the goals." But I'll concentrate on how they performed with great spirit and with a level of confidence that we haven't in the last few games. 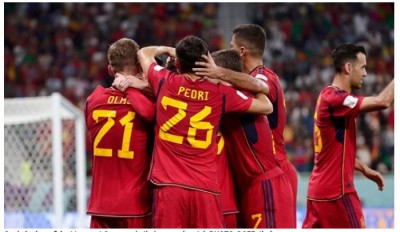