Hanuman Janmam-Utsav or Hanuman Jayanti is a Hindu religious festival that celebrates the birth of Lord Sri Hanuman. This day  is immensely venerated throughout India and Nepal. This festival is observed on different days in different parts of India. In most states of India, the festival is celebrated either in the month of Chaitra (usually on the day of Chaitra Pournimaa) or in the month of Vaishakha, while in a few states  of India like Kerala and Tamil Nadu, it is celebrated in the Hindu month of Dhanu (called Margazhi in Tamil).

On this auspicious day, devotees of Lord Hanuman celebrate him and seek his protection and blessings. They gather to temples to worship him and present religious offerings. In return, the devotees get prasad by the temple priests in the form of sweets, flowers, coconuts, tilak, sacred ash (udi) and ganga jal (holy water). People also celebrate him on this day by reciting various religious hyms and prayers like the Hanuman Chalisa and reading Holy Scriptures like the Ramayana and Ramcharit Manas. 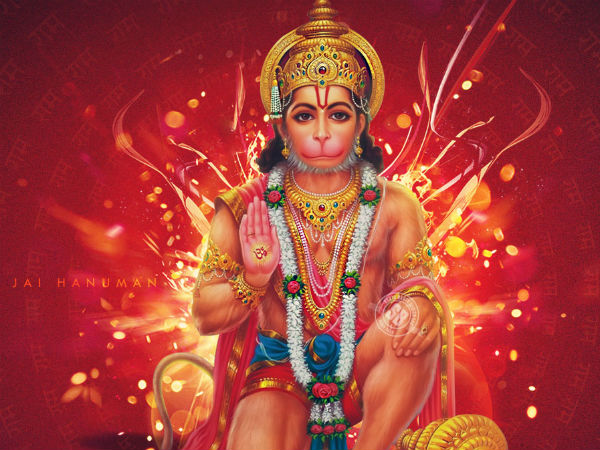 Hanuman Janam-Utsav is an important festival of the Hindus. Lord Hanuman is a true devotee of Lord Sri Rama and is widely known for his unwavering devotion to Sri Rama. In hindu religion Hanuman is regarded as  the symbol of strength and energy. According to Hindu Myths, It is said to be that Hanuman is capable to assume any outward appearance at will, wield the gada (including many celestial weapons), move mountains, dart through the air, and seize the clouds and equally  with swiftness of flight like his arch rival Garuda .

To help you wish your loved ones on this religious day of Hanuman Jayanti, Newstrack has compiled a list of images and greetings, messages for WhatsApp and facebook status.

He is the greatest devotee of Lord Ram.

4. Hanuman is an ardent devotee of god Rama,

and is worshipped for his unflinching devotion to the God.

Harmony and Prosperity on Hanuman Jayanti

for you and your family