Mohd Zubair Ali, the name behind famous food blog Hyderabad.Food.Diaries have made a significant name for himself in this industry through his dedication and hard work. He has been awarded with the prestigious award by the International blogger's council. WIBA (World Influencers & Bloggers Awards) for BEST FOOD INFLUENCER AND TRAVELLER 2021. He is the only influencer in blogging history of Hyderabad to receive this award. Though he has multiple awards across major platforms, he still considers the love of his followers whom he gladly refers to as HFD family to be his biggest achievement.

Zubair Ali is not someone who needs any introduction, as not only Hyderabadis but others too look forward to his reviews for Hyderabad’s food. He has been active on his Instagram handle, running around every nook and corner of the city to bring forward the hidden jems. He not only visits the star properties but also never shy’s away from exploring local stalls.

Zubair has always believed in honest work and follows the same principle for his reviews as well, he not provides valuable and true feedback to the restaurants he visits but also encourages other budding bloggers to follow suit. He has always believed in transparency and considers feedback to be the strongest pillar for improvement. He figured out his calling much early in his life, during the days when was still an intern at a star property. He got this love for food through his mother whom he considers to be the best chef and always want to go back home to her food. “No food can bring the satisfaction of mother’s home cooked meal”, says Zubair. He started documenting his food journey 6 years ago, many years after when he actually started exploring the food options in the city. He left his well-paying corporate job to follow his passion and we all can proudly say he has made a name for himself today and is an inspiration for many.

When Zubair started his food journey he had no idea how he will make a living and what route he should follow, all he knew was he did not want to be trapped in the concrete jungle of corporate world. He doesn’t discriminate restaurants based on the face value and pays equal importance even to the smallest ones as well as local outlets in the by lanes of the city. He has graced many launches with his presence and have always been transparent with his reviews, people look forward to my opinions and I don’t want to misguide them, Zubair says.

Zubair recalls the time when he decided to take time off his social media, all he wanted to do was nothing, but then again it became extremely difficult, not meeting people! “I have been working day and night from so many years and never thought of taking a break, because that’s what passion does to you, you love what you do so much that you don’t even want to take break from it”.

HFD’s page might appear to be really fancy with all those great food pictures and what not, but only the man knows what goes behind in bringing that to the audience every day. This is a skill he has acquired on his own and works on improving it every day. It takes him anywhere between 15 minutes to whole night to decide upon the content he will be posting, the time taken is the essence behind the quality of his work. 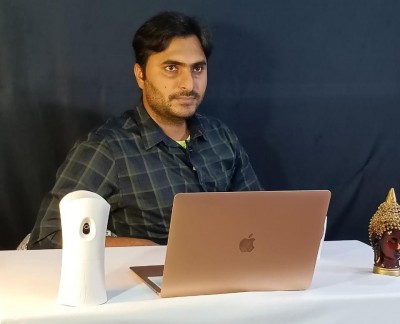 A fragrant dream, coming to reality, the Ayesha Ladha way