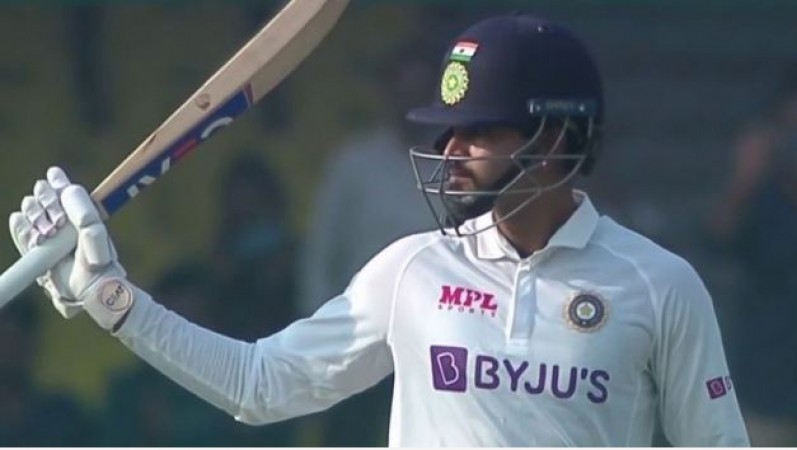 Kanpur: Shreyas Iyer has completed his century with a brilliant batting performance on the second day of the first Test between India and New Zealand today. In his debut Test match, Iyer completed his maiden International Test century with the help of 12 fours and 2 sixes with 157 balls. Earlier, on the second day of the match today, Team India resumed their innings at 258 for 4.

Ravindra Jadeja (50) and Shreyas Iyer (75) returned unbeaten on the first day of the Test yesterday. Ravindra Jadeja could not take his score forward today and was bowled by Tim Southee for a total of 50. Team India had a poor start on the first day of the match and its first wicket fell on the total score of 21 runs in the form of Mayank Agarwal. After this, Shubman Gill and Cheteshwar Pujara took the innings forward and did not lose any wicket till the lunch break. Gill, meanwhile, completed his fourth Test fifty. Gill and Pujara shared a 61-run partnership at the lunch break. However, the dice overturned in the second session and the Kiwis dominated.

In the second session, New Zealand took three big wickets of India. After completing his half-century, Gill returned to the pavilion at the beginning of the second season. After this, Cheteshwar Pujara and Ajinkya Rahane could not convert a good start into big innings. But Shreyas Iyer and Ravindra Jadeja, who came in to bat after that, ended the first day's play without losing a wicket. Team India were 291 for 6 and Shreyas Iyer (104) and Ravichandran Ashwin (3) were at the crease on the second day of the match today. India today lost the wickets of Ravindra Jadeja (50) and Wriddhiman Saha (1).