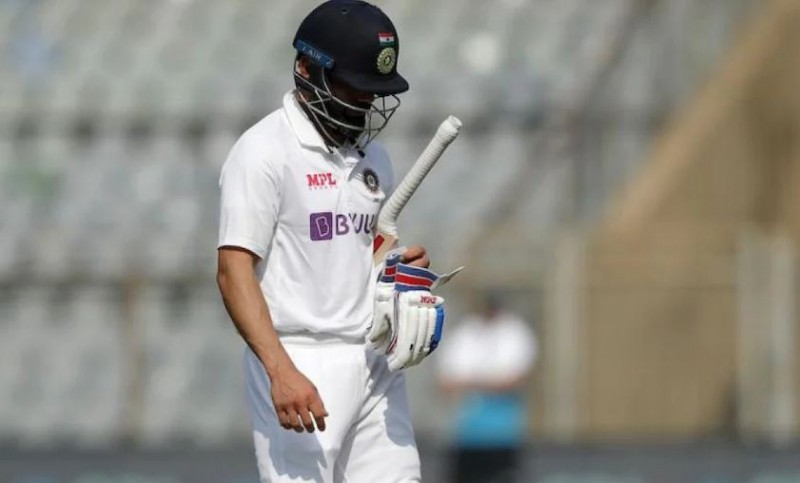 New Delhi: Team India's first innings faltered after the start on the first day of the Mumbai Test between India and New Zealand and they lost three wickets for 80 runs. Captain Virat Kohli, who was returning after the break, also returned to the pavilion after opening the account on zero. Indian captain Ajaz Patel got out lbw, which was a very controversial decision.

Bat first or pad?
Really brain faded even third umpire not convinced about it gives India to should keep the review #ViratKohli#INDvsNZ pic.twitter.com/RkeI70GhUO

Now questions are being raised over the decision to dismiss Virat Kohli. Virat Kohli himself was also stunned by the decision of the third umpire. The whole thing happened during the 30th over of the Indian innings. Spinner Ajaz Patel hit the front pad and was dismissed by on-field umpire Anil Chaudhary after New Zealand players appealed. Virat took a DRS soon after umpire Anil Chaudhary raised his finger. Replays showed that the ball did hit Kohli's bat, but it was difficult to find out if the ball hit the bat or the two things happened together before hitting the pad. Third umpire Virendra Sharma thought it appropriate to go with the on-field umpire's decision and dismissed Kohli.

Kohli went to on-field umpire Nitin Menon as soon as he was dismissed by the third umpire. The two talked for a long time, after which Kohli walked towards the pavilion with huge steps. Kohli looked furious on his way back to the pavilion and hit his bat on the boundary line. At present, Team India were 193 for 4, with Mayank Agarwal on 101 and Riddhiman scoring 16 runs.