'Farmer School to be set up in Jharkhand,' know what CM Hemant Soren said on Independence Day Ranchi: The 75th Independence Day is being celebrated today. Jharkhand Chief Minister Hemant Soren today hoisted the flag at Morhabadi Ground. Earlier, he inspected the parade. Speaking after hoisting the flag, CM Hemant Soren said, "His government is committed to giving Jharkhand people their due. 10th or 12th pass from educational institutions here is mandatory for appointment to third posts in the State. Reserved category candidates have been exempted from this.'' At the same time, he said, "A provision of Five lakh rupees to the athletes participating in the Olympic Games. Two crores, one crore, and 50 lakh will be given on winning gold, silver, and bronze medals respectively. The State Government has set a target of 12 percent of agriculture's contribution to Jharkhand's GDP.''

He further said, "Jharkhand Tribal University and Jharkhand Open University will be expedited. 1.28 lakh students are being given the chief minister's special scholarship. 10 crores have been given for this. The threat of corona has not been averted. Be careful. Follow the Corona Guidelines. It is being ensured that the people of the State do not face any problem in vaccination. The people of the state should get themselves and their families vaccinated at the earliest.''

At the same time, he said, "This year, about 16 lakh rural households will be provided pure drinking water through pipelines. You must be aware that elaborate security arrangements have been made at the city and venue on the occasion of Independence Day. Officials also took stock of the preparations on the spot.'' 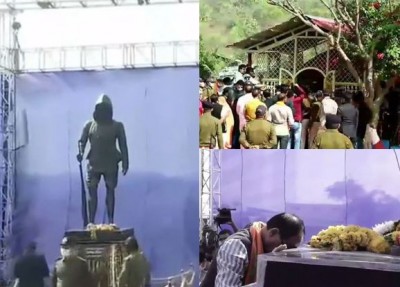