India is planning to steal factories from China for US$1.2 trillion BEIJING: In India, one in four infrastructure projects exceed its projected budget, and half of all projects are delayed. Technology, according to Prime Minister Narendra Modi, is the answer to these enduring and well-known obstacles.

PM Gati Shakti, which translates to "power of speed" in Hindi, is a $100 trillion ($1.2 trillion) megaproject that the Modi administration is developing to create a digital platform that links 16 ministries. The portal will provide businesses and investors with a one-stop shop for project design, quick approvals and simple cost estimation.

According to Amrit Lal Meena, Special Secretary, Logistics in the Ministry of Commerce and Industry, "The mission is to implement projects without overtime and cost escalation." The goal is to persuade multinational corporations to locate their manufacturing operations in India.

As China is still largely closed to the outside world and businesses are increasingly adopting a China-plus-one policy – ​​expanding or finding sources for other countries to diversify their businesses and supply chains – increasingly India will have an advantage by tracking the projects. Despite having a volatile infrastructure that deters many investors, Asia's third-largest economy offers a talent pool of mostly English-speaking workers, in addition to cheap labour.

Anshuman Sinha, a partner at Kearney India, which oversees the firm's transportation and infrastructure practices, stressed that the only way to compete with China is to be cost-competitive, aside from the fact that some countries relocate. There are political obligations to do. Gati Shakti aims to facilitate the movement of goods and manufactured parts across the country.

According to Sinha, the main principles of the project are finding new production clusters that do not already exist and connecting them to the country's ports, airports and railway system. Speed ​​power is derived from identifying nodes and improving the logistics network that connects those nodes according to the layers of the theory.

India needs to use technology to reduce red tape to restart its stalled infrastructure projects. According to Meena, of the 1,300 projects that the Gati Shakti portal currently manages, about 40% got delayed due to problems with land acquisition, forestry and environmental clearance, leading to cost overruns. At least 422 projects had some problems, and Portal fixed 200 of them.

Also Read: "UK travel is on sale" as the falling pound draws Americans

Under Gati Shakti, the government will use technology to ensure that a new road for laying phone cables or gas pipelines is never dug again, according to a government organization promoting investment in India. The plan seeks to model infrastructure projects after what China did between 1980 and 2010 or what Europe did after World War II to improve the country's "competitive index", according to government agency Invest India. .

In a speech to launch the program last year, Modi declared, "The India of today is committed to investing more in the development of modern infrastructure and is taking every step to ensure that projects are completed. . Don't face obstacles and don't be late." The secret to starting many economic activities and generating significant employment is high quality infrastructure. India cannot experience holistic development without modern infrastructure.

The website of the Ministry of Statistics and Program Implementation has data that shows how delays and over-budget projects are affecting the country's economic recovery in the wake of the pandemic. India had a total of 1,568 projects in May, of which 721 were delayed and 423 cost more than the original estimate.

Since taking office in 2014, Modi has increased infrastructure spending in an effort to boost the economy and create new jobs, as it was hit hard by an aggressive wave of Covid-19 infections. He has had some success so far.

While Samsung Electronics opened the world's largest mobile phone factory in the country in 2018, Apple now intends to begin production of the iPhone 14 in India, about two months after the product was first released from China. Local company Ola Electric Mobility is committed to building the largest factory for electric scooters anywhere in the world.

According to Meena, the government also uses the Gati Shakti portal to identify infrastructure gaps in first- and last-mile connectivity.
According to him, it has given priority to 196 projects to bridge the gap and improve port connectivity for coal, steel and food transport.

The Ministry of Road Transport is using the portal to design 11 greenfield projects for the government's US$106 billion Bharatmala scheme, which aims to build 83,677 kilometers (52,005 mi) of roads by 2022.

Modern warehousing, process digitization, skilled labour, and cost-saving logistics are all still priorities, according to Meena. "Choosing India as a location for manufacturing would be a sought-after choice for any manufacturer." 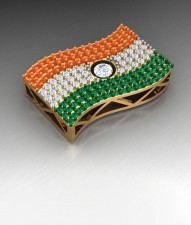