Supreme Court opens at midnight for 'terrorists', not hearing 'Bengal violence' it is over 5 days The petition was filed on the afternoon of May 3, 2021. The trust claimed that all the questions asked by the Supreme Court registry were also answered by noon the next day. Whatever doubts were there, they were resolved. In view of the prevailing situation in Bengal, there was a demand for an immediate hearing but it could not be heard on Wednesday. The trust has expressed its displeasure over this. The trust said senior advocates Pinki Anand and J Sai Deepak along with advocate Suvidatta Sundaram verbally requested Justice UU Lalit to take up the matter on May 6, 2021, which was rejected by the Supreme Court Registry. 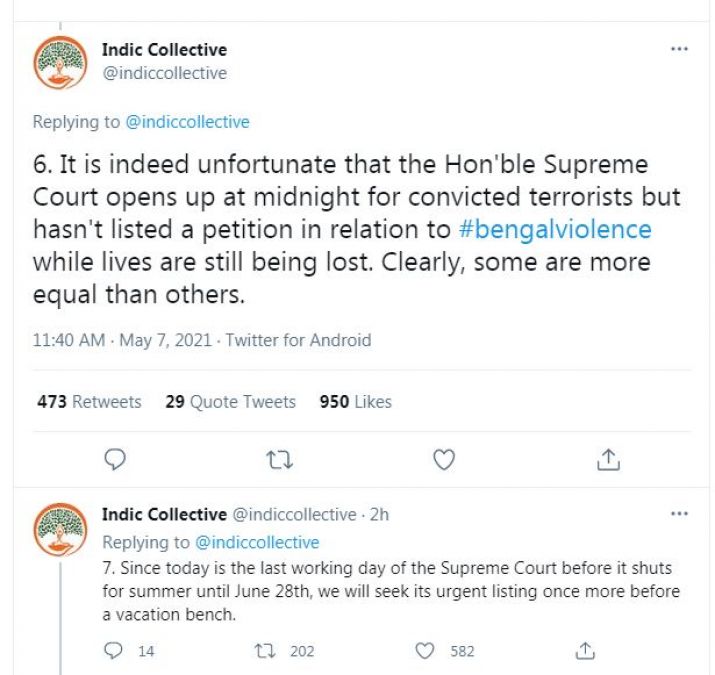 The Indic Collective says that in view of the seriousness of the situation, it was necessary to hear it expeditiously, but it could not take place. The trust said that another letter regarding the urgency was sent on May 6 but that too was rejected. "It is very unfortunate that the Supreme Court may open at midnight for convicted terrorists but the petition against political violence in West Bengal is not even being made on the list," the Indic Collective said via Twitter. There are still lives being learnt. Obviously, some people are 'equal' than the rest. At the same time, the Trust wrote that today is the last day of hearing in the Supreme Court, as from today the court will close for summer vacation till June 28.

The statement that The Indic Collective is talking about is of 2015. Darsal, the supreme court's door was open at midnight on July 30, 2015, when the petition of 1993 Mumbai serial blast convict Jacob Memon was dismissed by the President. At that time, several other lawyers, including lawyer Prashant Bhushan, had pleaded late in the night to postpone the execution. The hearing was conducted by a three-judge bench headed by Justice Dipak Misra at that time. The matter was heard at three o'clock in the night. The hearing began in the Supreme Court at 3.20 am on the night of July 30, 2015, which lasted till 4.57 am. The petition was dismissed by the Supreme court after cross examination. Soon after, Jacob Memon was hanged.

Alpesh Shah: It's not just about being a successful entrepreneur but also being a good human

Priyah Pawani , multitalented and believing in a cause