U.S. President Joe Biden announced US relations with Iraq would enter a new phase with American troops exiting combat operations in the country by year-end as he held discussions on July 26 with Prime Minister Mustafa al-Kadhemi. Amid the threat of an Islamic State resurgence and Iran's powerful influence in Baghdad, Biden stressed that Washington remains "committed to our security cooperation" while Kadhemi reaffirmed their "strategic partnership."

Biden also empahsized US support for elections in October in Iraq, saying Washington is working closely with Baghdad, the Gulf Cooperation Council and the United Nations to ensure the elections are fair.

Biden is currently also overseeing the United States' withdrawal from Afghanistan after 20 years of war, with the Taliban on the offensive amid fears they could even topple the Kabul government. Biden's comments confirmed his willinglenss to further limit US involvement in Iraq, but without removing the remaining 2,500 troops in the country, 18 years after the United States invaded to remove strongman Saddam Hussein.  The move could lend political support to Kadhemi, in power for little over a year and under pressure from Iran-allied political factions to push US troops from his country. 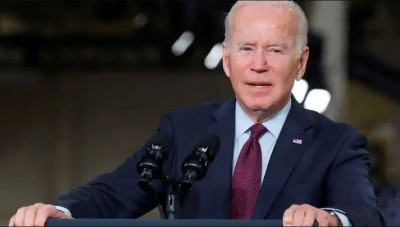