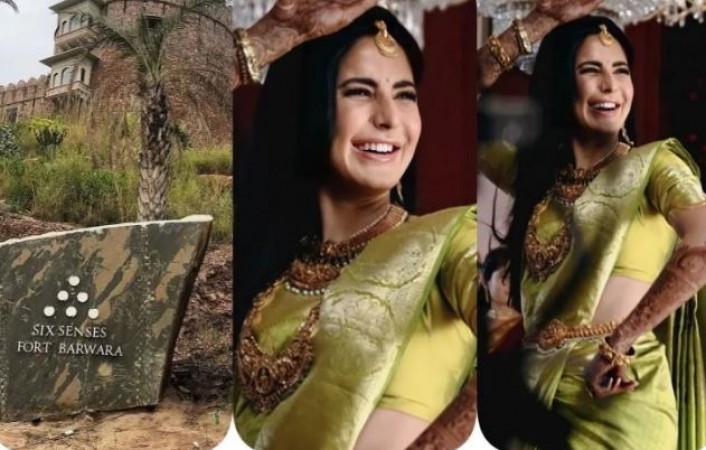 Every news related to Katrina Kaif and Vicky Kaushal's wedding is going viral at the moment. Fans are eager for the two to get married. Tell me katrina's wedding functions are starting today. Today is Katrina's mehndi ceremony which has been attended by many bollywood superstars who have arrived in Jaipur to attend. Vicky and Katrina themselves were also spotted at the airport last evening. Katrina Kaif and Vicky Kaushal were given a warm welcome by the management as soon as they arrived at the hotel. As soon as Katrina Kaif reached the hotel, there was a lot of fireworks. Now pictures of Katrina's Mehangi ceremony are going viral on social media.

Some photos have surfaced on social media which are said to be pictures of Katrina's mehndi. She is seen dancing in her mehndi ceremony. However these photos are from an ad shoot which fans are making viral by telling mehndi photos. No photographer has been allowed to take a picture at Katrina and Vicky's wedding.

Not only that, guests attending the wedding are also not allowed to carry the phone. Katrina's siblings and close friends have been arriving in Jaipur since Monday afternoon. 10 big Bollywood stars are arriving to attend the wedding. Guests will be accommodated in luxury tents at Vicky-Katrina's wedding. However, this facility will be available only for VVIP means special guests. Wedding planners are said to have planned to have 10 luxury tents for VVIP guests. These luxury tents have a one-night arambhink price of at least Rs. 70,000.