Patna: The protest by students in Bihar and Uttar Pradesh against the rigging of the RRB NTPC result continued for the third day on Wednesday. Let us tell you all that in Allahabad in UP, the students staged a violent protest, angry students set the train on fire at Gaya junction in Bihar. The police had to use force to control the situation. During this time the students also threw stones at the police. In fact, in Patna, Nawada, Nalanda, Buxar, Ara and many other areas of Bihar, students have stopped trains at many places. On the other hand, in this whole case, the names of the operator of Khan GS Research Centre Coaching and some coaching operators of Patna including Yutuber Khan Sir are coming up.

However, Khan sir has now clarified this.

First of all, Khan sir said on the allegation of instigating the students, "Some Eutubers say anything. That's their problem. We are stopping the students. Our YouTube has been frozen for a week. As soon as we are writing RRB in a video on YouTube, it is being deleted. He further said in his statement that the students of Jaipur were also talking about agitating, we have closed everyone in view of January 26.

At the same time, he also said, "I want to tell those who are accusing me whether my silence will end the movement." Patna DM Sahib had arrived to pacify the agitation at Rajendra Nagar terminal where he himself said that it was a leaderless movement. So where does Khan sir come from? Patna DM Chandrashekhar is a very settled person. His job is to maintain law and order, he is fulfilling his obligation 100 per cent. He's not wrong with anything from anywhere. Some who do wrong things will have to be taken to task. '

Apart from this, he also said- "The RRB should also think that one teacher can speak wrong, but the teachers and students of the whole of India will not speak wrong. The second decision of the RRB was the reason behind the outbreak of this movement. The students of NTPC were waiting at Patna Rajendra Nagar terminal to take a good decision for the RRB. At 3 pm, there were 500 to 100 students at the Rajendra Nagar terminal. The railways issued a notification in which the students felt that the railways had listened to their demand. But in those notifications, it was said that 1.5 crore students who have filled the form of Group D will be taken from the Mains exam. In 2019, the notification has come out, on February 15, they are saying that they will take the mains exam, in such a way that 1.5 crore students who were sitting in the house came on the road in an unorganized manner. The RRB should think that when you suddenly provoke 1.5 crore students, how can one teacher stop them? ' 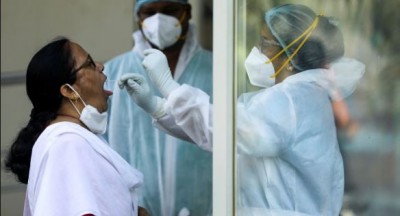