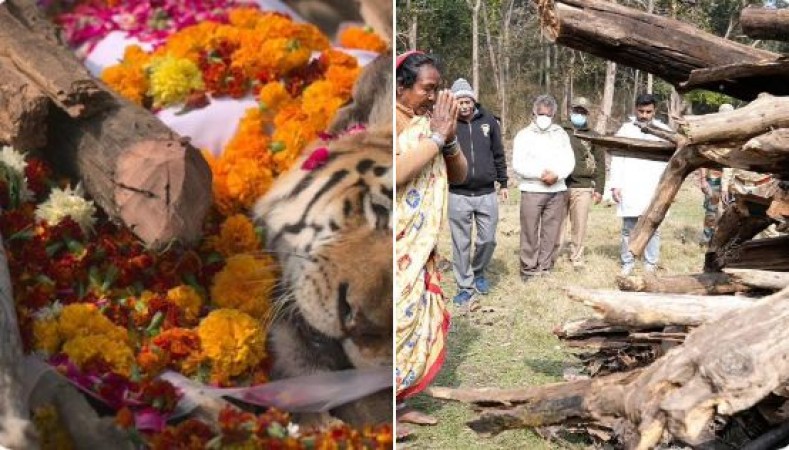 Indore: Due to the attraction of our country's civilization and rites, people are often drawn towards this ancient country of the world. What they get to see in India, they are not able to see in their country. In the Pench Tiger Reserve of Madhya Pradesh, a tigress was called the queen there. Her name was 'Collarwali tigress,' she has passed away recently. Her last rites were performed on Sunday with full rituals. This supermom tigress was cremated at the Tiger Reserve Park.

Last rites of tigress Collarwali of Pench. Where else you will find such view other than India !! pic.twitter.com/w1Q6STu793

Pictures of the same were posted by IFS Parveen Kasavan on her Twitter handle. He captioned it as 'The funeral of the tigress Collarwali of the Pench. Where will you find such a view other than India?' This 'Collarwali tigress' of Pench gave birth to 29 cubs. Which was a record in itself. That is why she was also called 'Super Tigress Mom.' Users on social media were surprised to see that a Tigress was finally being cremated. One user wrote that it looks as if she is sleeping peacefully.

The tigress was 17 years old. She had been ill for the past three to four days after which she died. She last gave birth to 3 cubs in January 2021. She was in the news in 2011 because she gave birth to five children at a time, which is very rare to see.

When has the deadline of FASTag been extended?