Sagar: A video from Sagar district of Madhya Pradesh is currently going viral. The video clearly shows the inhuman face of the policemen which is shocking anyone. In fact, three policemen misbehaved with the woman near Gandhi Chowk for not wearing a mask here. As part of the information received, the woman's daughter was manhandled and molested in front of her. Now a video of these policemen is going viral. In the video you can see that these policemen were accompanied by a woman policeman.

While the policemen were treating the woman inhumanly, someone present made a video of the incident. Now the video of the incident is going viral on social media. You all must be aware that at present there is a corona epidemic and in the meantime, Madhya Pradesh is under strict lockdown these days. People are forbidden to leave without masks, but the woman was going to the market with her daughter to collect grocery salmon and that too without a mask.

As soon as the police noticed the woman, they started assaulting the woman. In this video, it can be clearly seen that the victim screamed and pleaded in front of the policemen but did not feel pity for her at all. Meanwhile, the woman continued to try to escape from the hands of the police but the policemen did not stop and dragged her away. You can see the female policeman trying to put her in the car in this video. Meanwhile, when he refused to sit in the car, the woman policeman grabbed her hair and dragged her to the road. Now, after watching this video, people's anger is erupting.

Subsidy for farmers to grow crops other than paddy, CM Baghel announces 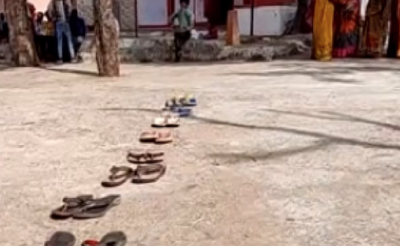