Hollywood's most talked-about couple Megan Fox and Machine Gun Kelly got engaged earlier this year. Megan Fox had also shared pictures of her engagement on social media. At the same time, after 3 months of engagement, Megan Fox has also made a revelation, after listening to which everyone's senses will be blown away. Megan has said that she and her fiancee Machine Gun Kelly have drunk each other's blood.

Yes, this time you heard it right. Indeed, in January Megan Fox and Machine Gun Callie got engaged. Then the couple had also mentioned their vampiric habit. He wrote, "Then we drank each other's blood." Megan Fox and Machine Gun Kelly mentioned the Vampiric Habit in very simple terms, although now they have revealed why did they drink each other's blood?

In an interview to a magazine, Megan Fox said, "I think if I say that I have drunk each other's blood, people have misled it. People are supposed to imagine us like goblets. We are like Game of Thrones who drank each other's blood but yes these were just a few drops and we did it because of the rituals.''

Continuing, Megan Fox continued, "I'm very much in control of the rituals. I read the tarot card. I'm also into astronomy. I do all these metaphysical exercises and meditations. Even between New Moon and Full Moon, I do the riches. Whenever I do this. It's a path that's used for any reason. It's controlled where we've said let's take a few drops of blood and drink it. Machine Gun Callie is a little haphazard. He cut off his chest with a broken glass lying nearby and told me to take my soul and drink blood. We both follow the rituals a lot and this ritual is a way of payoff.'' 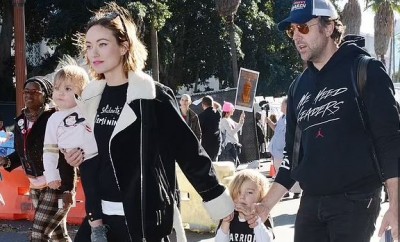