J&K Chief Minister Mehbooba on Sunday criticized the incident wherein ‘Dangal’ girl Zaira Wasim was harassed on the flight and said crime against women should be deal with effectively.Mufti post to Twitter, saying, "Any harassment or crime against women should be dealt with swiftly and effectively. As a mother of two daughters, I am appalled at what happened with @zairawasimz. Hope the relevant authorities take strict action @airvistara @Ashok_Gajapathi @jayantsinha". 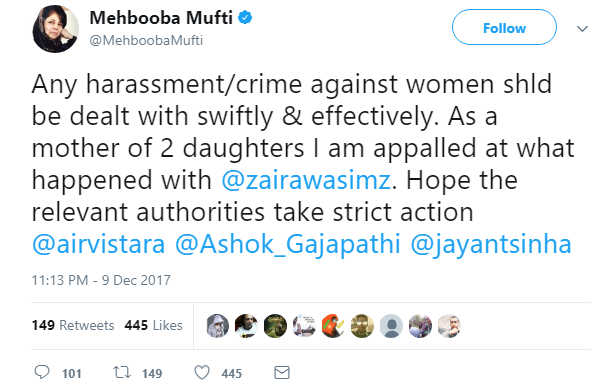 The occurrence came to fire when Zaira Wasim posted the ordeal she had to go through en route Mumbai by an Air Vistara flight in an Instagram story.In this video, Zaira Wasim could be seen suffering her tears and saying, "This is not done; I am disturbed. Is this how you're going to take care of girls?"

Taking note of the incident, the airline has ordered a detailed investigation into the incident.In a statement, the airline also acknowledges and apologise, adding Zaira Wasim started yelling at the accused passenger only during the descent of the flight, due to which the cabin crew couldn't move because it's mandatory to have no movement during the final phase of the flight as seat belts are on.