New Delhi: August 1 is being celebrated as "Muslim Women's Rights Day" today. Speaking to a special media portal on the occasion, Union Minister Mukhtar Abbas Naqvi said, "Triple talaq was a criminal evil and evil practice which has been abolished by Narendra Modiji's government, it should have happened long ago." In Shahbano's time, there was an opportunity for the Supreme Court to speak, but instead of abolishing the Rajiv Gandhi Government, it enacted a law to inactive the Supreme Court's decision, which is the result of Modiji's strong will power.

More than 5 crore minority girls were awarded scholarships in 6 and a half years to empower the same women, which has stopped the drop-out rate from 73 percent to 30/35%. Naqvi said that the Constitution has ordered the governments about the Common Civil Code, there is a need to prepare the society, the Government has not thought of anything in this direction.

Hitting out at the same AIMIM Chief Asaduddin Owaisi, he said, "These are the people (Owaisi) who have always been against the freedom and empowerment of Muslim women, they want to keep them under wraps, triple talaq was declared a legal offense and it was very clear that if Becheni was very clear, then if Muslim Women's Rights Day is being celebrated today, they will have a fence on their chests." On 1st August 2019, the Central Government had framed triple talaq as a legal defect, which is being observed as Muslim Women's Rights Day on 1st August. 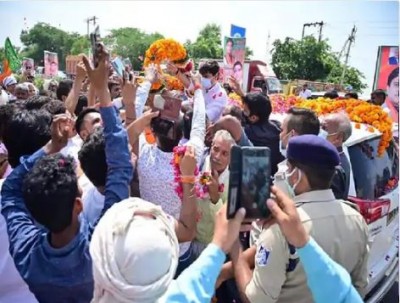