New Delhi: Mohammed Zubair, the co-founder of controversial news portal Altnews, was arrested on Monday. Zubair is accused of hurting religious sentiments. Zubair has been remanded in police custody for the time being for a day. Now the investigation of the funding and donations to Zubair can also begin. Zubair was arrested by the Special Cell of Delhi Police on Monday evening. 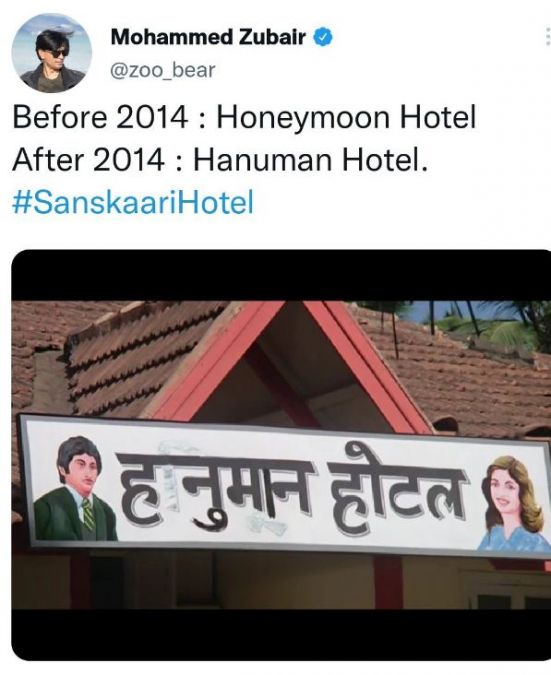 Deputy Commissioner of Police (Cyber Cell) KPS Malhotra has informed that a case was registered against Zubair earlier this month. He was booked under IPC section 153A  (promoting enmity between two communities) and section 295A (intentional acting with intent to hurt religious sentiments). It is being told that the tweet for which Zubair has been arrested was done in 2018. This month, a Twitter user sent a complaint to the Delhi Police about Zubair's 2018 tweet.

In 2018, Mohammed Zubair shared a picture on his Twitter. In this picture, 'Hanuman Hotel' was written. Sharing the picture, Zubair wrote in the caption, "Before 2014: Honeymoon Hotel. After 2014: Hanuman Hotel.'' In 2014, Zubair meant before and after the Modi government came to power. Hanuman devotee @balajikijain had lodged a protest over Zubair's tweet. @balajikijain on June 19 complained, "To link our Lord Hanuman Ji to the honeymoon is a clear insult to the Hindus because Hanuman Ji is a brahmachari. Please take action against this man.''

On June 20, the IFSO unit of the Delhi Police had lodged an FIR against Zubair on this complaint. On the evening of June 27, seven days after the case was registered, Zubair was arrested by the Special Cell of the Delhi Police. They have been remanded in police custody for a day. Sources in the cyber cell have informed that more than Rs 50 lakh has come into Zubair's bank account in three months. Now the police are going to investigate where Zubair got the money from and in what it was supposed to be used.