Crowds of people gathered for the darshan of Maa Nanda-Sunanda, devotee reached with a goat 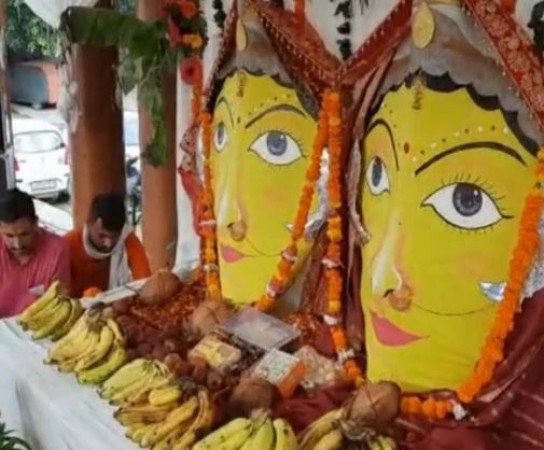 Dehradun: In Uttarakhand's popular Nanda Devi festival, devotees of Mata completed the construction of the idols of Mother Nanda Sunanda from the Kadali tree late on Monday night. The idol of Mother Nanda-Sunanda was kept in Nainital's Naina Devi temple premises for the devotees to see, after the worship and Prana Pratishtha amidst Vedic chants in the early hours of Tuesday. After that, from 4 o'clock in the morning, the crowd of devotees started pouring into the Naina Devi temple for the darshan of the mother.

At the same time, due to this, a person reached the temple with a goat to offer to the mother, but the police returned him by the way. Devotees started reaching the temple from three o'clock to see the mother. After 4.30 p.m. the devotees had darshan of the mother and took blessings. There was a long line of devotees in the temple till 7:30 am.

Even after that, there was a queue of devotees in the temple premises. Due to this the whole atmosphere of the temple and its surroundings resonated with the chants of Nanda-Sunanda. Due to the ceremony, the corona protocol was followed in the temple premises and its surrounding area. In view of the security on the spot, police personnel was also deployed in huge numbers. Let us inform you that from 12 noon on Monday, the work of making the statue of Mother Nanda-Sunanda from the Kadali tree started. In the Dashavatar Bhawan of Naina Devi temple, the artists related to the Ram Sevak Sabha under the leadership of Chandra Prakash Sah created the idols of Mother Nanda and Sunanda.