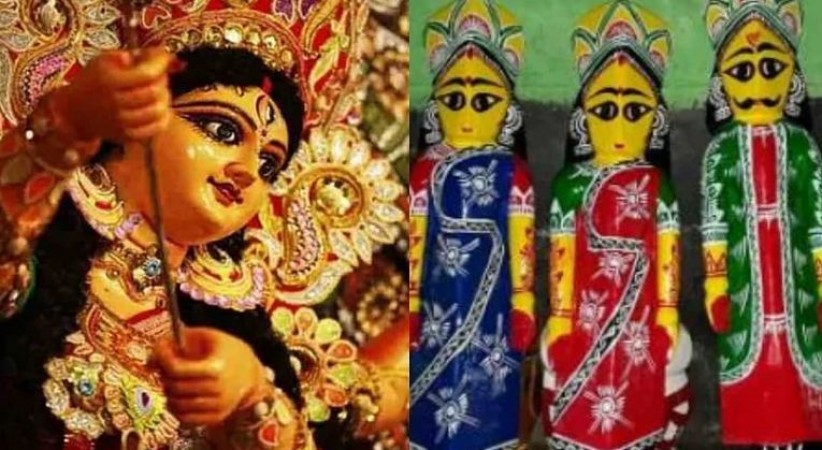 Kolkata: PM Narendra Modi, West Bengal Chief Minister Mamata Banerjee and former Congress national president Rahul Gandhi will be seen on the same platform this time at Durga Puja in Kolkata, the capital of West Bengal. Given India's political equation, it would be a unique event to see these leaders on the same platform, but it would not be a political platform, but a puja pandal in Kolkata, where the pandal will be decorated with puppets of these leaders as well as 2,000 other puppets.

20 families from Natungram have been constructing this puja platform for the past three months. Apart from remuneration, puja organisers will also hand over 50,000 rupees received from CM Mamata Banerjee to these families. The Durga Puja mandapa of a Shardotsav Committee in Beleghata, Kolkata, will feature 2,000 puppets simultaneously. According to the Puja Committee, it has no political purpose, but to encourage artists who have created wood artefacts through the world-famous Durga Puja in Kolkata, who have created it. In addition to the statues of these leaders, more wooden artefacts will be presented at the puja mandapa.

Different stages are being set up for various political parties in this puja pandal. Congress interim president Sonia Gandhi, Rahul Gandhi and former PM Manmohan Singh will be on the same platform. Their puppets are being made while delivering speeches. Left Party President Viman Basu Rajya and two former CMs Jyoti Basu and Buddhadev Bhattacharya will be together. PM Modi and Home Minister Amit Shah will be on stage. A separate stage is also being set up for the statue of CM Mamata Banerjee, where her statue will be accompanied by all development projects of the state government.

If the second dose of corona vaccine is not taken in time, then this NEWS is for you