Every style of famous TV actress Urfi Javed is liked by the fans. And this time, Urfi's airport look has robbed fans' hearts. When Urfi Javed arrived at the airport wearing a sari, everyone who saw it was relieved. Neither mutilated clothes, nor jeans top, but this time Urfi Javed appeared in a sari at the airport. This saree is looking very good on Urfi.

Wearing this floral print saree, Urfi became even more beautiful. And on seeing it, a fair of people started around Urfi. Urfi wore this saree well and also told how the saree can be made glamorous. At the same time, Urfi Javed gave a gift to the paparazzi. She said that she will give her designed clothes for all the photographers on her birthday.

Today Urfi Javed has become the star of social media, wherever she goes, people follow her. Her photos and videos are all over social media. And all this happened during the time of Bigg Boss OTT in which Urfi was eliminated in the first week itself. That means, in this sense, Urfi spent only 5-6 days in the show. But ever since they left home, they've been around. Especially with regard to her dressing style. 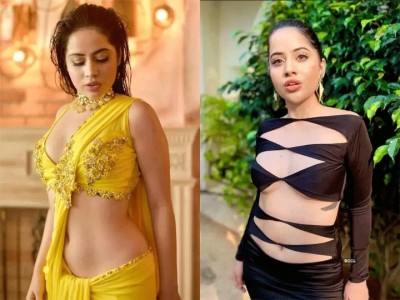