In a news release, Heidi Hammel, a Neptune specialist and interdisciplinary scientist on the Webb project, said, "It has been three decades since we last saw these faint, dusty rings, and this is the first time we have seen them in the infrared.

The Webb images also reveal fainter bands of Neptune's dust in addition to several sharp, narrow rings. Since NASA's Voyager 2's flyby of Neptune in 1989, when the first photographic evidence of the rings' existence was obtained, some of the rings have not been seen.

Neptune is the farthest planet in our solar system, and it is also the coldest, darkest, and windiest planet. The planet and its neighbour Uranus are referred to as "ice giants" because their interior composition is heavier than that of Jupiter and Saturn, which are gas giants and have higher concentrations of hydrogen and helium.
In contrast to its usual blue appearance in views captured at visible light wavelengths, Neptune appears white in the new images. This is due to the fact that the planet's gaseous methane, which is a component, does not appear blue to Webb's near-infrared camera (NIRCam). 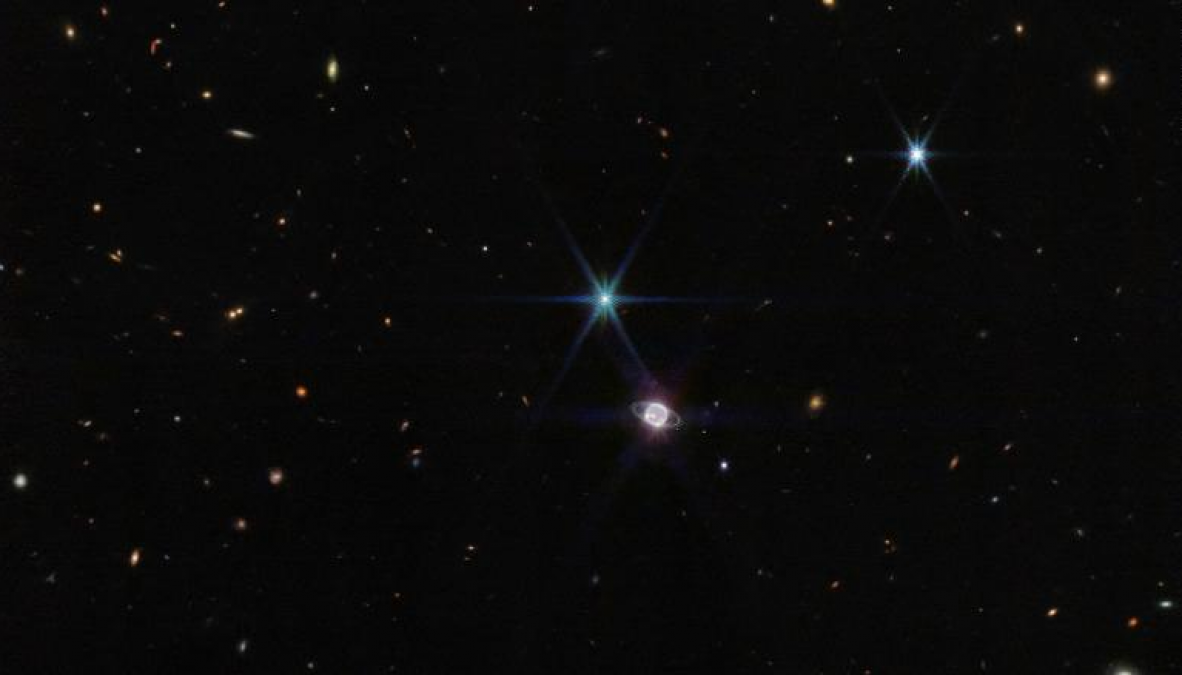 In this image by Webb's Near-Infrared Camera, a smattering of hundreds of background galaxies, varying in size and shape, appear alongside Neptune.

Methane-ice clouds, which are bright streaks and spots that reflect sunlight before it is absorbed by methane gas, are also discernible in the images. A bright, thin line that circles the planet's equator may also be seen, which the press release describes as "a visual signature of global atmospheric circulation that powers Neptune's winds and storms."
Seven of Neptune's 14 known moons, including its largest moon Triton, which orbits the planet in an unusually backward direction, were also photographed by Webb. Triton may have been an object that was caught in Neptune's gravitational pull while it was in the Kuiper Belt, a region of icy objects at the edge of the solar system, according to astronomers. In the upcoming years, Webb will be used to advance research on Triton and Neptune.

Neptune travels through its solar orbit in the distant, dark area of the outer solar system, 30 times farther from the sun than Earth. According to the press release, noon on Neptune is comparable to a dim twilight on Earth because the sun is so small and faint at that distance.
NASA, the European Space Agency, and the Canadian Space Agency are all involved in the more than ten-year Webb mission.
The space observatory's massive mirror, which can see fainter galaxies that are farther away than other telescopes, has the potential to improve scientists' comprehension of the universe's beginnings. With images of Mars, Jupiter, and most recently Neptune, it is also illuminating our own solar system with its steady and exact image quality.