Union Minister tells people who have come to seek help: Offer coconut to Balaji to escape from corona Jodhpur: The corona epidemic has created panic everywhere and more than three lakh cases are being reported every day and thousands of people are dying. Everyone is disturbed by the deepening of the oxygen crisis. But even then, Gajendra Singh Shekhawat, minister of water power in the Central Government and mp from Jodhpur, made a statement that has left him in a state of shock.

In fact, Shekhawat reached different hospitals in his parliamentary constituency Jodhpur on Monday to check the treatment of corona patients. Due to this, when he reached Mathuradas Mathur Hospital, a man came to him and started pleading for the treatment of his mother. The man pleaded with Minister Shekhawat to save his mother. Thereafter, he directed the superintendent of the hospital to treat the mother of the victim. But by the time the doctors treated his mother, he succumbed.

As a result, the family members of some more patients approached Union Minister Shekhawat seeking help and gave strange suggestions that doctors are doing their job, they should offer a coconut at Balaji Temple, Balaji Maharaj will do everything right. Everyone present was stunned to hear the minister's strange suggestion. Perhaps people are also thinking that Minister Shekhawat is trying to say that now the government and the system are also on God's trust. However, the Jal Shakti Minister later spoke to superintendents and doctors of all hospitals and directed them to collect oxygen and other essential commodities in the hospitals. 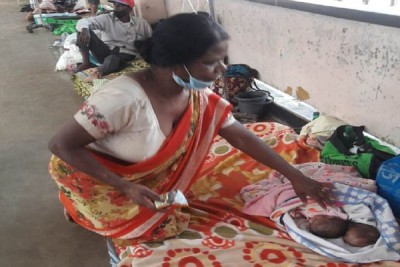