OMG! This girl tried 50 surgeries to look like Angelina Jolie Love can reach up to some extreme levels. Here is the latest example of such kind of love and affection. One of the 19-year-old Sahar Tabar hails from Iran. The teenager has allegedly undergone 50 surgeries to look like her favourite Hollywood actress Angelina Jolie.

As the report states which is published by The Sun, Sahar has not only got more than 50 surgeries to follow Jolie but is also on a crazy diet, so that her weight is maintained at 40kg. This makes her look seriously underweight. Not only this the paper also stated that Sahar considers herself the biggest fan of the Tom Raider actress, and was told that she "would do anything" to look like her. 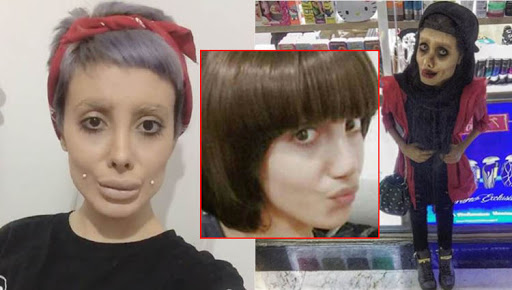 Sahar has a huge following on Instagram, and regularly posts photos of her transformation. But, the teenager has been on the receiving end of some harsh comments. Some have been calling her a "zombie", others have been saying it hard to believe that she is "real". Some even feel that Sahar is lying, and her photos are the result of careful make-up, Photoshop or even prosthetics.This horrifying images of the girl are complete leaves a question mark that is it actually a real one or just a prank? The most different and beautiful to look at the puja is to wear these sarees. Shehnaaz Gill reveals the secrets of her own beauty Psychology in the world of Fashion Orange peel will make the face white, mix this thing and use it. If lice have become in the hair, then neem powder is applied in this way, it will be finished from the root

There will never be a termite in the wood if this thing is sprinkled.

Dandruff will disappear with lemon juice, use this way

Sesame oil is best for both hair and skin

If you are troubled by pimples then use watermelon like this