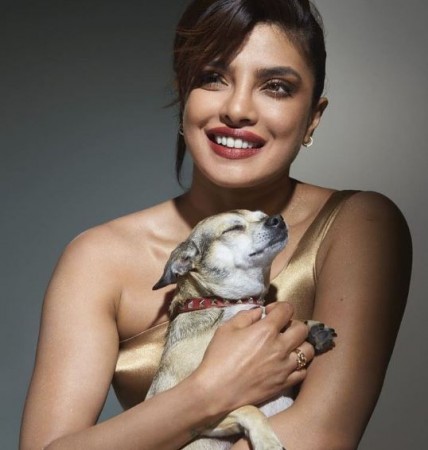 Noted actress Priyanka Chopra, who made her acting mark from Bollywood to Hollywood, never gives up on her desi style. Whether it's their desi choice in food or their love for sarees in terms of dress. This desi style of Priyanka wins the hearts of fans every time. Once again, Priyanka has given evidence of her being a desi. She was seen sitting on a palanquin in the plane, the photo of which is going viral.

The same is the speciality of this photo in which she was seen sitting with her palanquin. According to the report, the photo is from the time when Priyanka was on her way to Spain with her co-star to shoot for the Hollywood series Citadel. It showed Priyanka wearing a black and white striped top, badge coloured pants and a grey shade blazer.

Recently, Priyanka participated in the Global Citizen Live event. Priyanka hosted the show in this show held in Paris. She also shared some solo pictures of herself with the Eiffel Tower, taking time out from the event day. Priyanka looked stunning in an Earth Themes outfit designed by Prabal Gurung. Talking about the projects of the actress, these days Priyanka is busy shooting for Citadel. Apart from this, Priyanka has several Hollywood and Bollywood projects in her hands. She is working with Hollywood star Keanu Reeves in Matrix 4, a romantic comedy with Mindy Kelling, wedding themes reality show, mother Anand Sheela's biopic and Farhan Akhtar's Bollywood film Zee Le Zara.

Why I became a social worker? - Gautam Kulkarni