A baby boy has been born in the house of pop singer Rihanna. Reports say that Rihanna and boyfriend ASAP Rocky have welcomed their first child on May 13. Let us tell you that on May 13, Rihanna gave birth to a lovely son in Los Angeles. The happiness of Rihanna and her boyfriend, who have become the parents of the son, is on the 7th day. Rihan was one of those beauties who carried more than one glamorous look in a glamorous style even during pregnancy, whether it was wearing a bikini in a public place or entering a transparent dress in an event, every look of pregnant Rihanna got everyone's attention. pulled aside. Seeing her dress, many times social media users would be surprised and many even become crazy about her.

Significantly, in February, Rihanna announced about the pregnancy. Rihanna is going to be the mother of boyfriend A$AP Rocky's child Rihanna and Rocky's romance was rumored 2 years ago. Media reports say that Rihanna and Rocky's love story was in the news soon after the singer's breakup with Haseen Jameel.

Let us tell you that the 'Desi Girl' of Bollywood, sharing a photo of the singer's maternity photoshoot on her Instagram story, has written, congratulating her on becoming a mother. Priyanka wrote in the caption – congratulations @badgalriri. 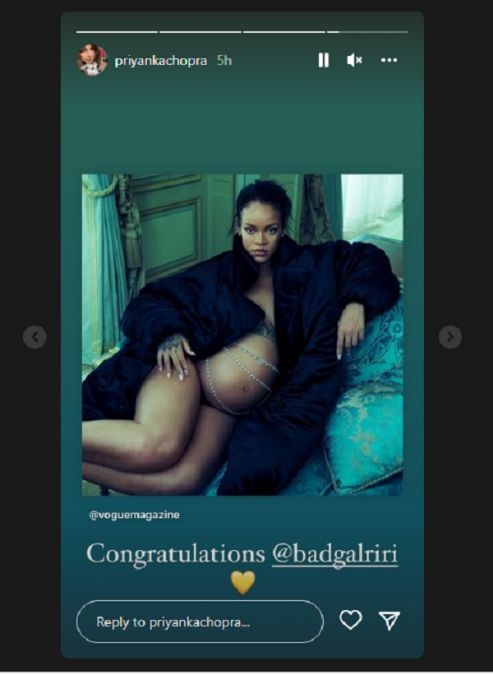