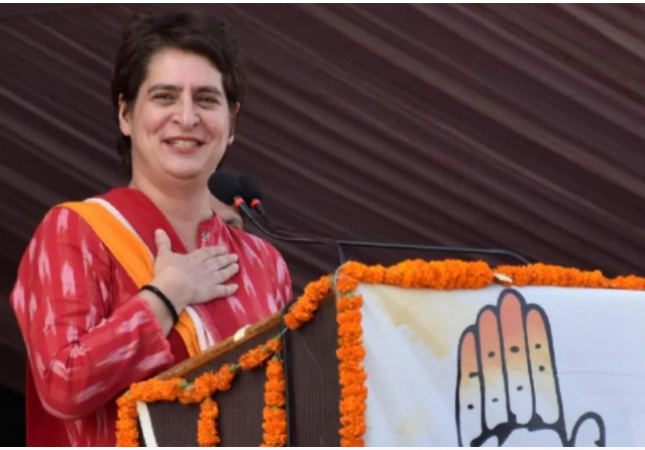 Goa: Priyanka Gandhi, the top Congress leader, is expected to visit Goa for a day on Friday, December 10.  She will reach Goa, where elections are due in February next year. She will also address various events and interact with youngsters and women, a party leader said on Wednesday. She will speak at a number of events and interact with young people and women, according to a party leader.

On December 10, Priyanka Gandhi will meet with women in Morpirla hamlet in the Quepem assembly constituency in south Goa, according to Leader of the Opposition Digambar Kamat. Chandrakant Kavlekar, the BJP's Deputy Chief Minister and a former Congress member, represents the Quepem seat. Priyanka Gandhi would pay respect to freedom warrior Ram Manohar Lohia in Assolna village in south Goa on her way to Morpirla hamlet, he said. "During the Portuguese rule 75 years ago, Lohia gave a clarion cry for Goa Revolution," Kamat added.

She would meet with children at the MCC ground in Margao, also in south Goa, on the same day. She'll meet women at a different location in the city later. In 1967, then-Prime Minister Indira Gandhi lay the foundation stone for the MCC building, according to Kamat.

Priyanka Gandhi would fly to Dabolim after attending activities in Margao, where several renowned leaders will be admitted into Congress, he said. Priyanka Gandhi's visit comes as the Congress continues to lose ground in Goa. In the 40-member Goa Assembly, the Congress, which won 17 seats in the 2017 Assembly elections, currently has just three MLAs, with the majority of legislators transferring their allegiances to the ruling BJP.