Today the Bhoomi Pujan of Ram temple is going to be held in the spiritual city of Uttar Pradesh, Ayodhya. For this, not only the entire Ayodhya but the people of many states are excited. During Bhoomi Pujan, Prime Minister Narendra Modi will also be involved there. Congress has always kept away from the temple issue, but now it is continuously presenting its views about the temple. Recently, after Congress General Secretary Priyanka Gandhi, now her husband Robert Vadra has also released the poster regarding Bhoomi Poojan of the grand temple of Ramlala. 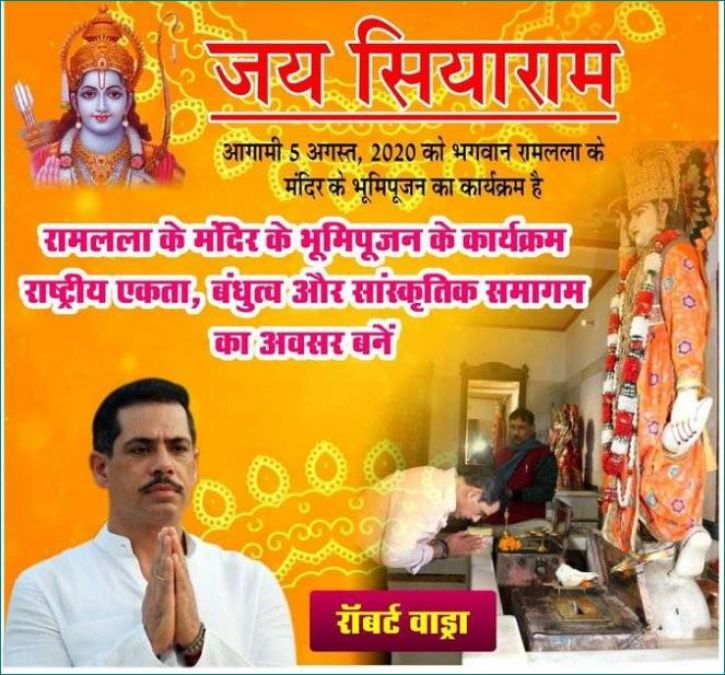 Recently, a picture of Lord Ram is seen in the poster issued by Robert Vadra. He is seen worshiping in this picture. In this poster, it is written that 'Bhoomi Poojan program of Ramlala's temple should be an occasion for national unity, fraternity, and cultural congregation.'

Apart from this, Robert Vadra is also seen standing with folded hands in this poster. Before Robert Vadra, Priyanka Gandhi also gave a statement. In that statement, she said, 'Ram is there in everyone. Ram is with everyone. The program of Bhoomi Pujan of Ramlala temple should be an occasion for national unity, fraternity, and cultural congregation.' Before her, former Chief Minister of Madhya Pradesh Kamal Nath also organized the recitation of Hanuman Chalisa.