Rani Mukerji made this big disclosure about her daughter, Know here Rani Mukerji, a Bollywood actress, is currently making headlines for her films Bunty and Babli 2. His film will be released in theatres on Friday, November 19th, 2021. Despite the fact that the film has received mixed reviews from critics and viewers, Rani is still pushing it. Rani Mukerji has disclosed that her daughter has played a significant role in her upcoming film 'Bunty Aur Babli 2'.

Rani never misses a chance to spend time with her kid. In an interview, she said, "She was with me for a long time while I was shooting in Abu Dhabi and even helped me choose a lot of clothes and accessories." I recall being in London when Adira finally got together and insisted on coming to help with the selection. She made all of the decisions herself and adapted to my appearance. As a result, Adira shares a special bond with Bunty and Babli 2.

Rani also revealed that Adira saw the film and really enjoyed it. She explained, "He loved me in the movie." She prefers to see me in comedic roles and will never watch me in a serious film. She was rolling around and giggling while watching the movie, and it made my heart happy to see her having a good time. In truth, she was blown away by the fact that in the film, I have a 10-year-old kid named Pappu (laughs). In truth, because she's too young to be properly divulged, I'll know exactly how she feels when she grows up." 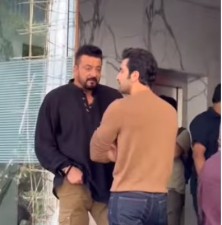