New Delhi: Senior journalist Ravish Kumar has resigned from the NDTV. According to the opindia report, Ravish Kumar, who has been working for NDTV for many years, has finally bid farewell to the news channel. However, nothing clear is yet to be ascertained as to what Ravish Kumar's next plan is. Ravish Kumar is quite popular about his programme Prime Time on NDTV. Similarly, there are reports in the media that Adani Group is going to buy NDTV news channel. However, Ravish Kumar himself has written a post on Facebook calling the news of his resignation a rumour, in which he has termed the news of resignation as baseless. 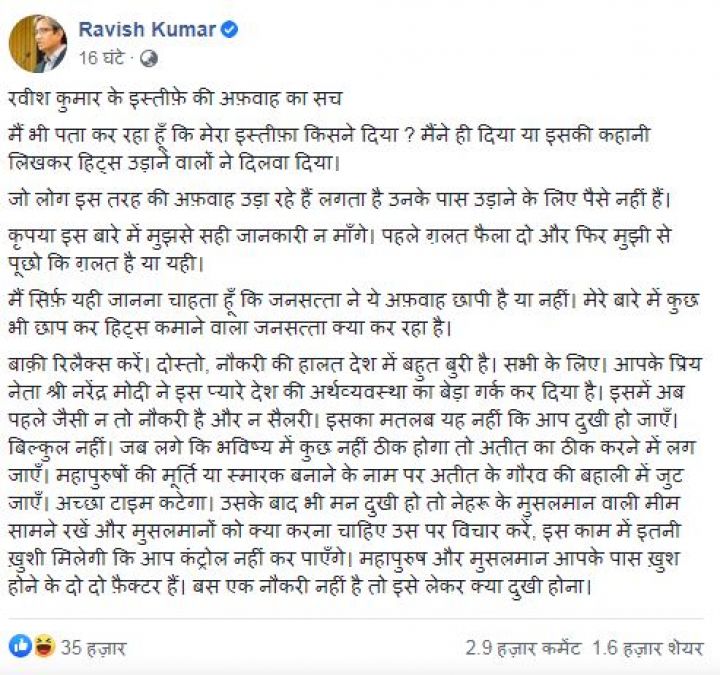 At the same time, there is news going on in the media that Adani Group is going to buy NDTV news channel. Actually, NDTV has always been an attacker on industrialists like Mukesh Ambani and Gautam Adani. Senior journalist J Gopikrishnan tweeted in this regard that, 'Adani group is going to buy an old TV channel, which always attacked them, this deal will be signed in London, some people say that this deal is 1600 crore is of Rs. But at present, the person who is at the top will get only Rs 100 crore and the major shareholder will take Rs 750 crore. However, there is no official confirmation of this deal as well.

Buzz in Delhi : Adani Group going to buy an old TV Channel which always attacked him&signing will be in London-some say Rs.1600 cr total deal value. But the guy currently heading will only get around Rs.100 cr & saved from cases & major shareholder will take Rs.750cr
Cc : @BDUTT https://t.co/DdQEp9fvms

Let me tell you that speculation about Adani Group buying NDTV started when Sanjay Pugalia, who was an editorial director in 'The Quint,' was elected as the CEO as well as editor-in-chief of Adani enterprises' media initiatives.

After all, why is Britain not recognizing India's corona vaccine?