Mandi: Former Union Minister Sukh Ram's son and BJP candidate Anil Sharma has registered a major victory from the Mandi seat in Himachal Pradesh. Anil Sharma's victory is not only his, but it is also the victory of the heritage and the people. This victory of the BJP candidate on the festival of elections has increased the enthusiasm of his fans. Everyone is congratulating him on the happy occasion. Anil Sharma's son and Bollywood actor Aayush Sharma has also given a congratulatory message to his father. 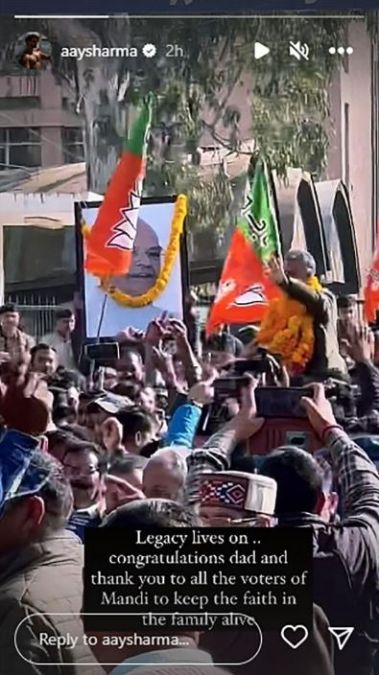 Aayush Sharma writes, "The legacy lives on. Congratulations Papa and thank you to all the voters of Mandi for reposing faith in our family.'' Hailing from a respectable family with a political legacy, Aayush Sharma is the grandson of former Telecom Minister and former Union Minister late Pandit Sukh Ram Sharma. Sukh Ram Sharma passed away in May this year. Aayush Sharma's grandfather has been one of the most respected politicians in the country. He is also known for bringing the telecom revolution to India. At the same time, BJP candidate Anil Sharma has carried forward the political legacy by winning the Himachal Assembly elections. People reposed faith in Ayush's father and made him MLA with a majority from the present Mandi constituency. Hopefully, Anil Sharma will live up to the expectations of the people. On the work front, Aayush Sharma is going to be seen in films like AS04.