Bollywood film actress Sara Ali Khan has been busy promoting her film 'Atrangi Re' for a long time. However, Sara is always in the news for her simplicity and cool style on social media. Sara also knows how connected her fans feel to her, which is why the actress may have started the Namaste Audience series in which she puts in any fun content.

Sara shared a video of her having with filmmaker Karan Johar this time in the same series. Sara welcomes Karan Johar while speaking Namaste Audience in this video, then the actress asks a funny question to the filmmaker. The actress asks 'Why Why was the mushroom always invited to the party?' After this question, Karan Johar started thinking for a few seconds, then said that he had no clue. The actress then utters that 'because he was a fun-gi means fun-guy.' However, after this lam joke, the actress herself is not able to stop laughing. 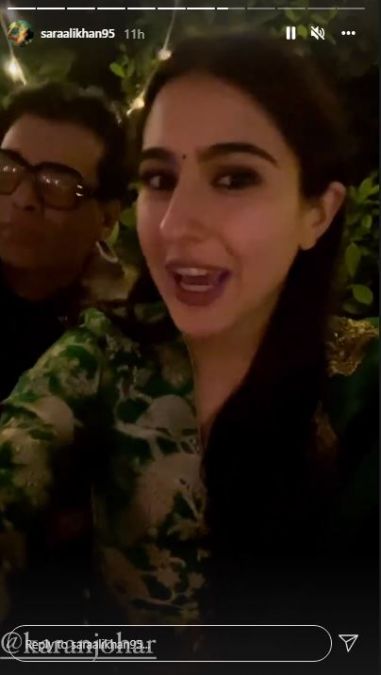 Sara had shared several videos with her common friend Tanya recently through the same series. She appeared in an auto ride and sometimes an ice cream parlour. Now fans are also reacting to Sara and Karan Johar's funny story. Sara has been in the news for a long time about the film Atrangi Re. The film features Abhinetra working with south Indian film star Dhanush and Bollywood superstar Akshay Kumar.

VIDEO: Shilpa Shetty saved herself from falling due to the dress getting stuck in her feet

This famous actress was stunned to see dinosaur eggs, asked questions to fans

Kangana Ranaut may campaign for BJP in Uttar Pradesh polls, Says,'' I dont belong to any..